I have long been a proponent of investing in the defense and tobacco industries, which offer investors the unique combination of ‘quality’, typically measured by such things as low debt and low earnings variability, and ‘value’, or undemanding valuations.  That this is unique to defense and tobacco can be seen in the scatterplot below, where other high-quality businesses in technology and consumer staples, – both stalwarts of the broad ‘quality’ universe, – are often expensively valued*: 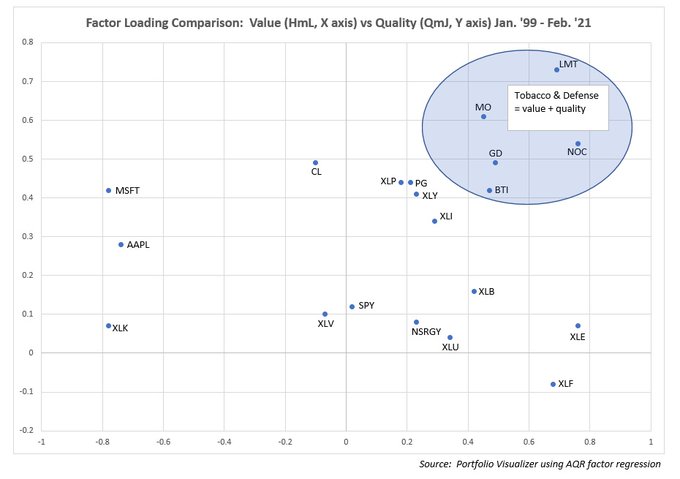 In addition to this unique combination, tobacco and defense have historically been reliable inflation shelters, rewarding investors with positive real returns during periods of higher inflation that more negatively impacted both their respective sectors and the broad market.  This should be of interest to investors given the latest uptick in consumer prices, which was the largest increase since 2008.

In the case of tobacco, there has been only brief 120-month period since 1947 in which real returns briefly turned negative:  the late 1990s when shares fell at the height of government-led lawsuits against the industry.  In fact, during the 1970s (highlighted in the chart below), when inflation averaged more than 7% annually, and both consumer staples and the broad market generated significantly negative real returns, tobacco stocks performed extremely well, with real returns averaging more than 6.5% annually, versus roughly -1.8% for both staples and the broad market.

This is no fluke, of course:  the increase in the costs of tobacco-related products has far outpaced broad consumer costs over time; for example, since 1986, tobacco CPI has averaged close to 7% annually versus just 2.5% for all items:

It is true that a great deal of this cost increase is due to regular tax increases, but it is also true that the excise tax structure affords tobacco product manufacturers an advantage when it comes to pricing power.  As my friend Jon Fell of Ash Park wrote last December:

Tobacco is the only Staples industry in which prices can consistently rise higher than inflation, and excise structures create a further advantage for manufacturers in disguising the level of price increase they themselves take.  To the extent that some of the tax burden is specific (based on the number of cigarettes per pack) rather than ad valorem (based on the selling price), manufacturers can obtain a bigger price increase of their own relative to any given level of retail price increase.  That excise multiplier effect is very important when tax accounts for 60-80% of the retail price.

This pricing advantage is crucial in an inflationary regime in which more commoditized staples industries, which are also more exposed to commodity cost increases, – think petroleum for disposable diapers, for example, – can pass along costs only very slowly.

A less obvious advantage for tobacco stocks in an inflationary regime is their typically depressed valuation multiples.  In the 1970s, for example, broad staples earnings in real terms were actually quite robust, but inflationary pressures pushed multiples into contraction.  This effect is typically less pronounced when starting valuations are much less demanding.

Like tobacco, defense stands out among its peer group for proving to be resilient in the face of inflationary pressures, with only the immediate aftermath of the end of the Vietnam War the sole period of negative real returns for the industry since 1963:

Like tobacco, defense stocks have almost always found themselves to be in the cheapest quintiles of the market, which helped during periods such as the inflation of the 1970s when the group suffered far less multiple contraction than the broader market.  Yet the industry has other advantages over its industrial peers when it comes to inflation.  Military machinery has become increasingly complex and expensive, and new projects require years to design, test, and produce.  Given the critical nature of these weapons programs, special materials for these projects must be obtained without much concern for costs, so demand is price inelastic.  Contracts are written with cost inflators that allow defense companies to pass along these costs to the government very easily.  All of these factors, along with the cyclical and episodic nature of large military spending programs, combine to create a structure that benefits military contractors in terms of pricing power.  This is obviously quite unlike most other industrial peers who feel the pressures of inflation much more sharply.

In sum, if inflationary pressures in the wake of the COVID pandemic prove to be more than transitory, investors might find safe havens in tobacco and defense.