In last month’s post “Mastery or Ignorance,” we wrote that:

“[I]nvestment in industries less subject to technological disruption has seemingly been a winning strategy, as witnessed by the outperformance of the food and tobacco industries over the market in general, and capital-intensive, easily disrupted industries such as shipbuilding and steel in particular…”

Furthermore, we referenced a great Credit Suisse article that stated:

With these two key thoughts in mind, I wanted to examine with some specificity how this has played out in certain major sectors.

Using the data found on Dartmouth professor’s Ken French’s site, I ran the numbers for the ten basic industries for which he has aggregated return data.  Before we get into the results, we should give some examples of the specific industries included in the sector portfolios Professor French has assembled.

Luckily, Meb Faber has already done that work for us: 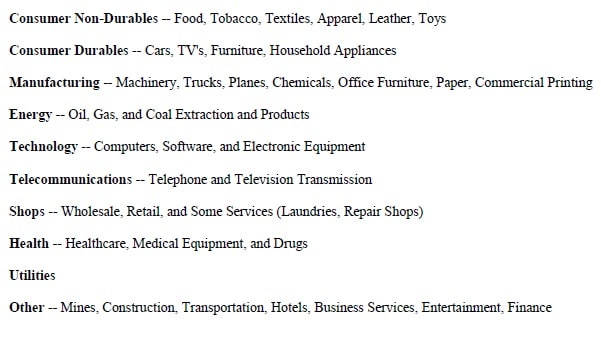 Some of the results may surprise you.  For example, despite their reputation for counter-cyclical or “defensive” performance, utilities actually have had a standard deviation higher than the overall market, and their Sharpe ratio is lower.  They’ve also been subject to pretty massive drawdowns (max drawdown was almost 86%!): 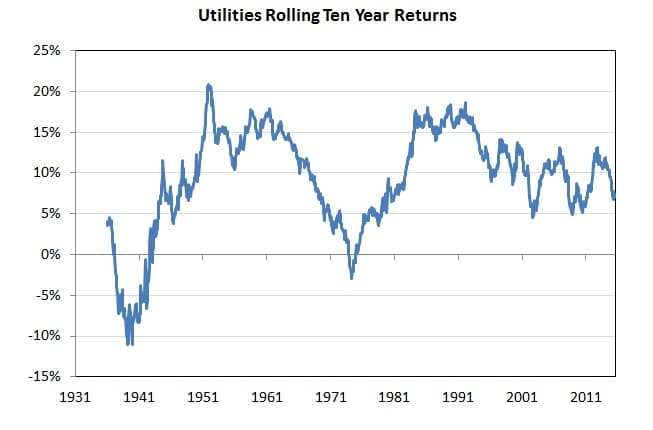 Part of the reason for the counter-intuitive performance in utilities can be explained by that early in the sector’s history, they were in a speculative bubble of sorts; as Amity Shlaes wrote in her book, The Forgotten Man:

“[T]he industry was the world’s most promising and would grow only if it got capital.  And it did:  the line on graphs of the American utilities industry in the 1910s and ’20s moved up in an incontrovertible diagonal, consumption increasing each year, even in the early 1920s recession, seemingly independent of the overall economy.”

It’s important to remember that much of America was only now getting electricity, and investors poured money into utilities on potential alone. The resulting disconnect from fundamentals led to over-investment, just in time for the 1929 crash, and the Great Depression.

Then, after a great recovery for the sector after World War 2, utilities once again experienced a speculative burst, this time on the hope of new power sources such as nuclear.  However, environmental and regulatory concerns, – as well as safety concerns regarding nuclear power, – crimped growth in the sector, and it began a second secular decline that troughed only in the 1974 recession.

Although it’s an old industry, the telecommunications sector has suffered from its own over-investment mania; the combination of the Bell breakup in the early 80s, the promise of globalization, and technological innovation (e.g.e fiber optics) led to huge overinvestment in TelCom companies.  Yet again, this led to disastrous returns for investors who allowed themselves to buy into promise over reality and fundamentals: 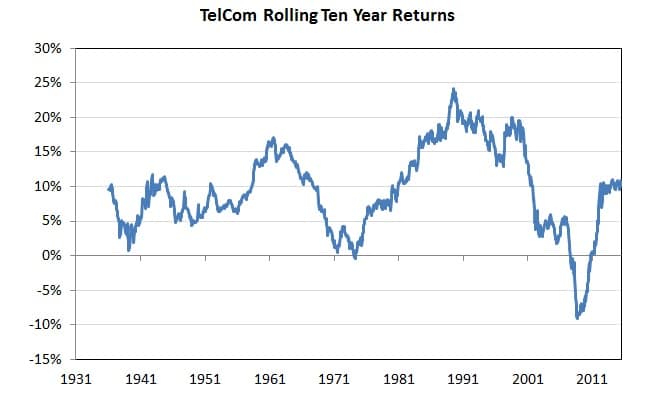 “Today, there is no economy but the global economy, no Internet but the global Internet, and no network but the global network,” wrote George Gilder, a technology guru, in February 2001. He predicted that two telecoms firms, Global Crossing and 360networks, “will battle for worldwide supremacy, but in a trillion-dollar market, there will be no loser.” Yet within a year, both had filed for bankruptcy—a graphic illustration of how quickly the industry’s titans have been toppled. There were losers after all: banks and shareholders, who are now smarting from enormous debt write-offs and precipitous declines in telecoms share prices.

The telecoms bust is some ten times bigger than the better-known dotcom crash: the rise and fall of telecoms may indeed qualify as the largest bubble in history. Telecoms firms have run up total debts of around $1 trillion.” 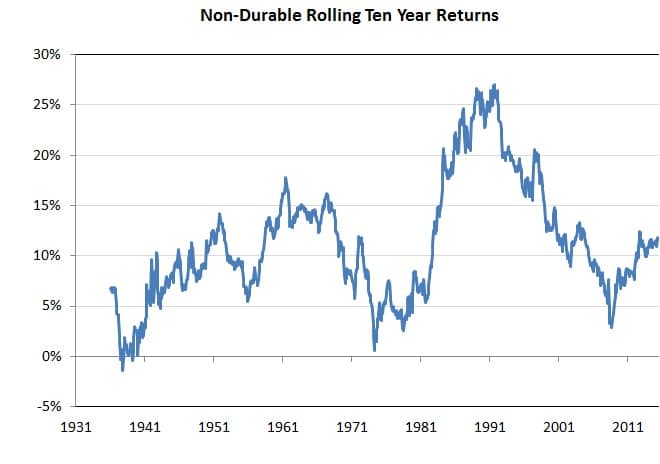 Clearly, there hasn’t been a negative ten-year period since the Great Depression, and even then the results were only just negative.  The stability has been somewhat remarkable; obviously, investing in companies who cater to a steadily rising population with predictable consumption habits has been not only profitable, but relatively stable.  I say stable because there has not been much disruption in consumer staple industries.  After all, for example, the PC of the 1990s has been supplanted by the tablet of the 2010s; Tesla threatens to disrupt traditional car manufacturers; but a cigarette, even after 100 years, is still a cigarette.

You can see from the JP Morgan chart below that even since 1980, consumer staples stocks have suffered fewer negative excess returns than other sectors, while offering more “extreme” winners and most closely tracking the overall market’s performance:

Said differently, if your life depended on investing in one sector, the obvious choice would be consumer staples.

Perhaps the biggest reason for the success in consumer staples stocks is counter-intuitive.  It is well-documented that human beings are terrible at making predictions and forecasts, yet we always ask ourselves things like “What at the industries of the future?”  It’s easy to imagine that we generally discuss these hypotheticals while we are taking a smoke break, sipping a cup of coffee, or eating a hotdog.  What I mean to say is that perhaps because industries such as food and tobacco offer seemingly so little “tremendous” future return potential, we overlook them as we anticipate major technological shifts, be they driver-less cars or space flight.  It follows, then, that by their very nature, consumer staple industries are rarely priced to extremes, thus reducing the risk of too much optimism, overinvestment, and bubble valuations, which are the most obvious cause of disappointing long-term results.

In future posts, we will examine these issues further, looking at various valuation metrics, and digging a little deeper into the story of my favorite sector, consumer staples.