I recently noted on Twitter that my feed of mostly financial professionals had progressed from reasons an expensive market warranted lofty valuations in January to reasons why the fourth quarter stock market decline (punctuated by the worst December performance ever) was indicative of a looming recession and prolonged bear market.  Though anecdotal, such sentiment checks can be useful in so much as they are indicative of how market participants are broadly thinking – and positioned – at a given point in time.  That being said, I will take the opposite of what seems like the mainstream opinion currently, and offer you my bullish case for equities.

First of all, let us briefly examine the record.  In January of 2016, which coincided with a nasty market correction, I wrote about stock market valuations and suggested they were not excessive, and well within historical norms given prevailing inflation and interest rates.  In October of 2017, I updated that post, and observed that after a huge run up in equity prices from January of 2016, the market was expensive based on just about any measure.  Now, the situation has reversed once more, and I believe that equities have regained their appeal.

Why do I say that?  Well, for one, valuations have come down almost across the board.  One of my favorite methods for valuation is to frame price-to-earnings (“P/E”) multiples in the context of inflation.  One can see from the scatterplot that, since 1960, the relationship between inflation and P/E is a strong one, with high explanatory power: 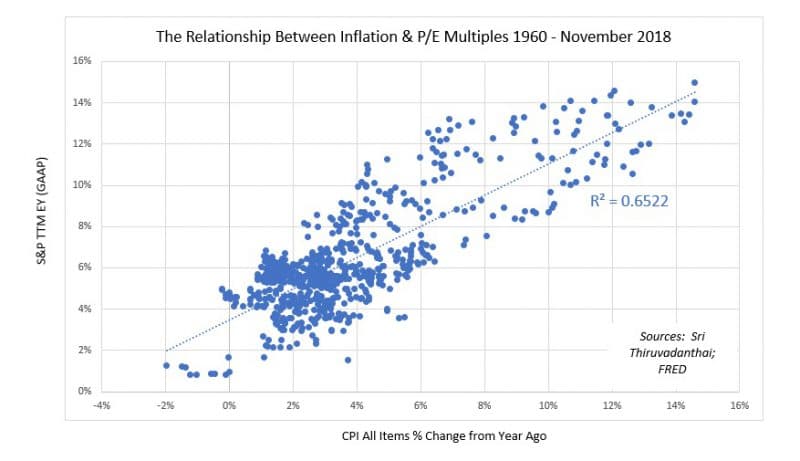 So, it obviously makes sense to take inflation into account when assessing whether equity P/E multiples are excessive, cheap, or fair.  A good way to do this is to consider the “Rule of 20”, which is often written about by economist Dr. Ed Yardeni (example here).  Essentially, the idea is to subtract the inflation rate from 20, and that should give you a fair value for the P/E multiple.  Compared to the actual P/E multiple, a negative “Rule of 20” multiple would suggest that stocks are undervalued relative to prevailing inflation.  We can see from the graph below that that now appears to be the case for the first time in several years: 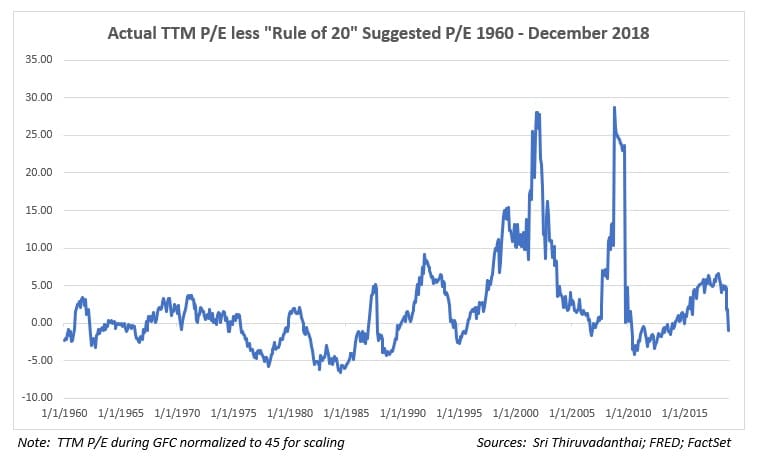 However, I think the analysis should not stop there.  Consider that stocks are currently coming off a period of excess valuation by this measure.  Ignoring the anomalous values caused by the distortions of the financial crisis and also the extreme valuations of the tech bubble, the current cycle is most similar to that which prevailed around the end of 1994.  Then, as now, the Fed was in a tightening mode, and equities languished as they adjusted to a higher discount rate by compressing the P/E.  Interestingly enough, in 1994, the trailing twelve-month P/E began at more than 21, and ended the year at 15, a compression of about 30%.  In 2018, the beginning multiple was a bit more than 24, and is now about 17, also a compression of about 30%.  In retrospect, equities may have overreacted then as the Rule of 20 suggested a less than fair value for stocks by the beginning of 1995.  Perhaps the same is true now, though of course if it is, it is not by as much.

It is true that a big reason for the surge in equities in 2017 and early 2018 was the expectation for and realization of a massive corporate tax cut.  Just how much of that was priced in at the end of 2017 is unclear, but based on forward looking P/Es, just about everything entered 2018 as well above the then 20-year average.  Now, by comparison, after a nasty decline in price, forward looking multiples are, for the most part, well below the 20-year averages that prevailed at the beginning of the fourth quarter of this year: 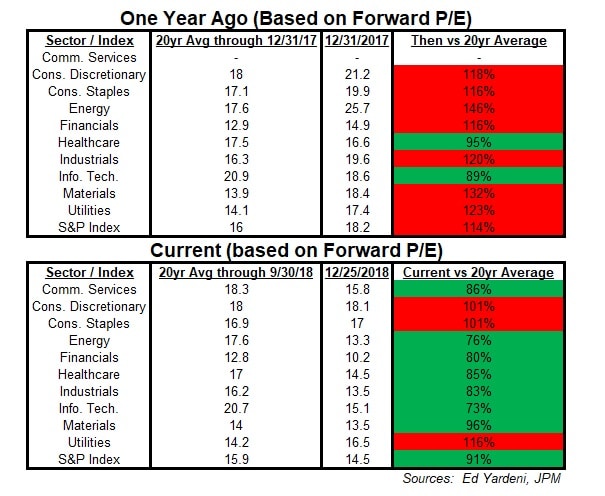 Sure, stocks look cheap, you are likely to retort, but only if there is no recession.  However, a look at some of the macro data suggest that there is no real clear evidence that one is around the corner.  Consider that prior to the last three recessions, oil prices spiked prior to the downturn.  That is clearly not the case now:

Secondly, jobless claims are useful in the sense that they have tended to rise ahead of major downturns.  Again, that is not the case currently:

Finally, there is the yield curve, which has certainly compressed quite a bit, and even inverted a little over a small part of the curve.  However, most analysts agree it is the 10-year Treasury bond less the Federal Funds Rate or the 3-month Treasury bill that is the best metric for this analysis, and, while both show flattening, neither has yet inverted:

I am no expert on macroeconomics, but from my perch, 2018 looks like a classic year of multiple compression as an expensive market has had to adjust to a more hawkish Fed stance and a resultant higher discount rate.  Obviously, a recession will come at some point, and it will likely come as a surprise to most as is usually the case.  However, given the balance of data available, stocks, while not extremely cheap, are, in my opinion, broadly attractive, and while the market can continue down in the near term, favorable valuations today should reward patient investors down the line.