Ten years ago, investors interested in the rapidly growing mobile device market were presented with two options, “Company A,” which was the dominant player in terms of market share, and “Company B,” which was a known player in the technology sector, but a newcomer to the mobile phone industry.  For value investors, the choice seemed to be clear as Company A traded at a steep discount to Company B no matter what valuation metric was used:

As it happened, however, opting for shares of Company A based purely on its valuation and market share would have been a disaster for value investors as Company B went on to outperform Company A by 340 basis point annually over the next ten years: 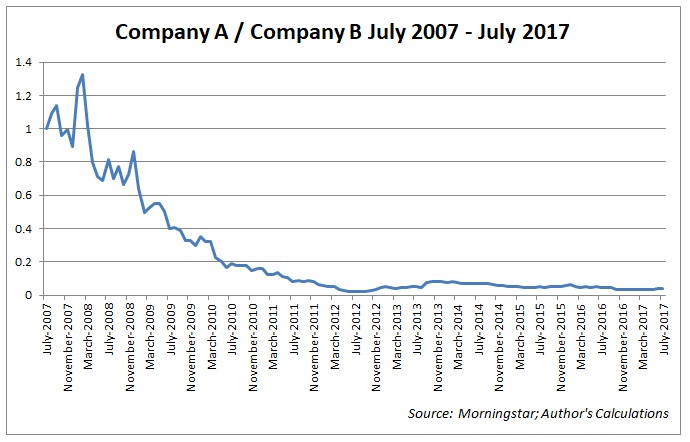 To anyone familiar with the mobile device market, it is probably no surprise that “Company A” is actually Nokia, and “Company B” is Apple.  Apple’s iPhone, which debuted in 2007, went on to revolutionize the cellular phone market, and helped propel Apple to the position of the world’s most valuable company.  Nokia, on the other hand, was the victim of Apple’s disruption, and its shares plummeted along with its market share.  Despite being the apparent “value play” almost all throughout the subsequent ten years, a $10,000 investment in Nokia ten years ago would be worth less than $3,500.

Similarly, ten years ago, established retail companies like JW Nordstrom, Macy’s, and JC Penney traded at steep discounts to Amazon, which was then still well below its tech bubble peak.  It goes without saying that Amazon has since soared to new heights, while the apparently cheaper shares of the traditional retailers have collapsed to multi-decade, if not all-time, lows.

Successful value investing requires a discipline and focus that help one withstand the long bouts of pain and doubt during which value investments bear no fruit.  Less discussed, however, is that it also requires getting the future right.  I can speak from personal experience on this as I maintained a few client positions in Nokia for a few years after the debut of the iPhone.  At the time of its debut, I never envisioned that it would be as successful as it has.  After all, the mass appeal of a revolutionary product is not easily quantified by any metric.  Eventually, I did the prudent thing, and cut my losses, and I even rotated into Apple.  To have done so may have been a violation of value investing discipline, but the reality is that Nokia’s apparent “value” was really an illusion; Apple’s innovation and the disruption it produced made that abundantly clear.  History seems to be repeating itself now not just with Amazon and brick-and-mortar retailers, but also with NetFlix and traditional media companies, and perhaps with Tesla and automobile manufacturers.

This is not to say that value investing should be abandoned due to its apparent futility.  On the contrary, just as history is littered with clear instances of creative destruction, it is also full of examples of investors foolishly – in retrospect – abandoning great companies and industries out of fear of their being disrupted, with railroads – the assumed victims of revolutionary automobile and airline travel – being the clearest example.

The minor detail, though, in the case of railroads is that took decades for their true value – and thus their outperformance – to be realized.  It is easy in retrospect to see the mistake investors made in discounting railroad shares.   In real-time, however, as we are seeing today, it is immensely difficult not to doubt the viability of entire business models currently under pressure by disruptive new companies and industries.

In order for value investing to succeed, in my opinion, it requires both opportunism and skepticism.  Metrics and models can tell an investor only so much.  Investors should be well-acquainted with history in order to understand that innovation and change not only create opportunities, but also destroy capital.  Financial metrics must be paired with concepts such as moats, which, taken together, separate true value from the illusion of it.

Both the author and clients of Fortune Financial hold positions in Apple.