Last summer, I made an attempt to visualize how the next bear market will play out by using examples from the two most recent S&P 500 bear markets, which began in 2000 and 2007, respectively.  Then, earlier this year, I looked at drawdowns for the S&P 500 at both the index and individual sector level.  I thought it might be helpful to build on these two articles in an attempt to estimate (albeit in a very crude fashion) the depth of the next S&P 500 bear market.

First of all, it is important to remember that no two bear markets are alike in the sense that some can be short and vicious, as in 1987, or they can be inflationary and grinding over a long period, as was the case in the 1970s.  Given this, any attempt to visualize what the future may hold is bound to be futile, but it may serve a purpose in terms of gauging one’s capacity for risk tolerance, or, if you will ‘loss acceptance.’

That being said, we should begin by defining a bear market as an index-level peak-to-trough decline of 20%.  Using this definition, First Trust notes that, since 1926, there have been eight bear markets that have lasted, on average 1.4 years, with an average loss of 41%.  This aggregate-level analysis is limited, however because of the changing nature of the S&P 500.  For example, in 1990, highly cyclical technology shares made up roughly 6% of the S&P 500, whereas now they make up more than one-fourth of the index.  Conversely, energy stocks, which stand to benefit from inflationary pressures, have seen their share of the S&P 500 cut in half, from 13% in 1990, to 5.5% today [Note – Since real estate only recently became separate from financials, I have added them back into the 2018 financials allocation for simplicity’s sake.]: 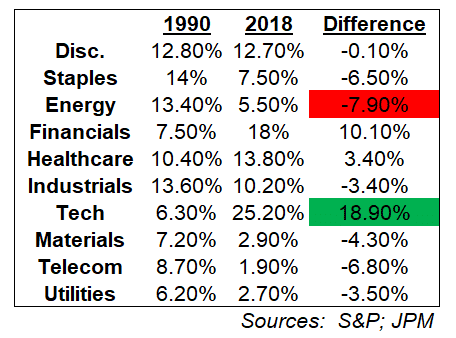 Secondly, while there have been bear markets outside of recessions, they are generally pretty rare, so we can focus instead on the bear markets that coincided with the last few recessions.  Doing this allows us to overcome a lack of sector-specific performance data for the downturns of 1973-75, 1980-1982, and 1990.  Combining these data with the data from the 2000-2002 and 2007-2009 recessions / bear markets allows us to get a better idea of how today’s S&P 500 would fare in the next down cycle.

Here are the total return performances by sector over the last five recessions and/or bear markets*: 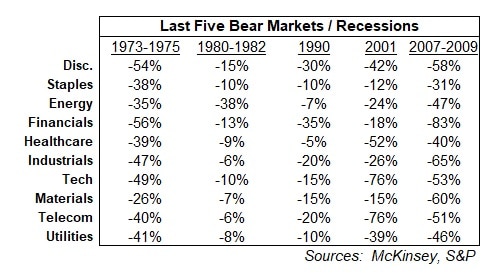 Then, if we take today’s S&P 500 sector weightings and multiply them by their historical average and median bear market / recession declines, we arrive at a projection of about a 35% decline in the S&P 500: 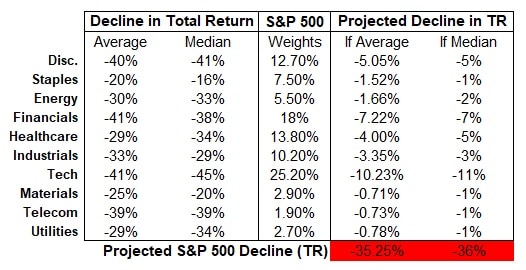 Obviously, there are caveats to this analysis.  For one, it is a very simplistic approach, and I do not take into account many important variables, such as starting and ending valuations, Treasury bond rates, and so forth.  We also have no idea how deep and protracted the inevitable bear-inducing recession will be, and, therefore, no idea how far earnings will decline as a result.  Yet, because the data here span the length of five very different recessions, – inflationary in the case of 1973-1975, massive rate hikes in 1980-1982, and a financial crisis in 2007-2009, – we can get a reasonable idea of what could be in store whatever the economic gods throw at us.

The Fed Needs to Unbridle the Yield Curve – S&P