At the beginning of the year, I calculated the drawdown duration by sector for the S&P 500, the developed world outside the United States, and emerging markets.  The idea was to see which sectors have offered investors more consistent returns in terms of having less frequent and shallower drawdowns.

As a follow up on that project, I thought it would be instructive to perform the same analysis, but this time comparing popular factor strategies, such as buybacks, dividend yield, and so forth.  The limitation here was the lack of historical data, particularly in Europe and Japan, data for which go back only to May of 2001.  Nevertheless, perhaps some useful, albeit qualified, conclusions can be drawn from the exercise.

To begin, it is useful to examine the returns for each strategy relative to that region’s benchmark.  For the S&P 500, with data going back to 1994, every factor strategy save value outperformed the overall market, with shareholder-friendly dividend and buyback strategies yielding (pun intended) the greatest excess returns: 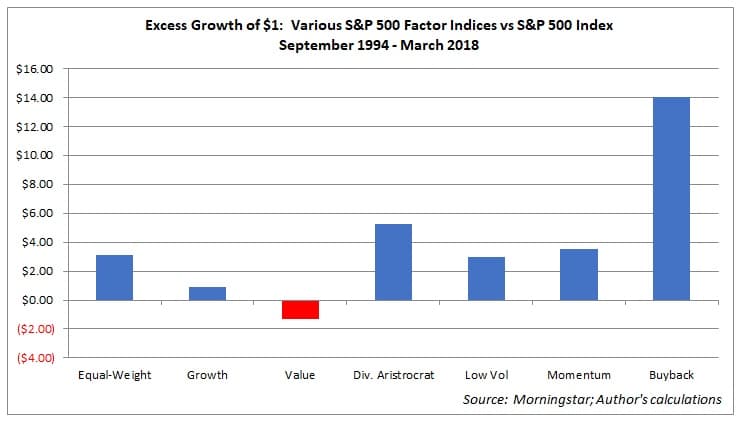 Interestingly, just as in the United States, buybacks delivered the greatest excess returns, while the high dividend yield factor lagged minimum volatility and momentum: [Note:  Due to lack of an exclusively European momentum index, I substituted MSCI’s EAFE index, which is roughly two-thirds Europe, and thus close enough for our purposes here.] 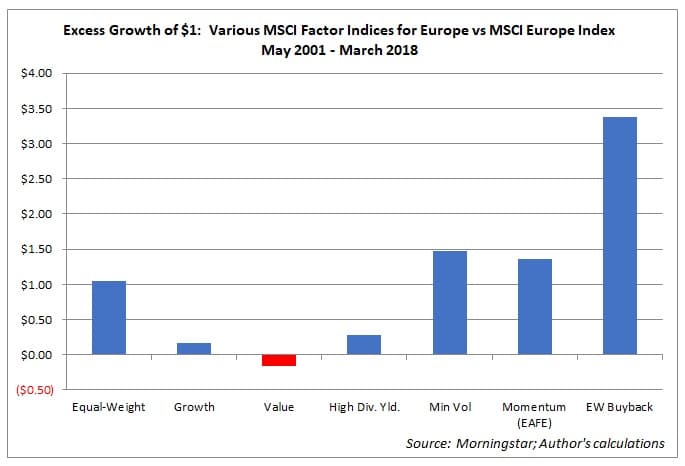 In Japan, unlike in the U.S. and Europe, both growth and momentum underperformed the benchmark, and value actually outperformed.  However, once again, a shareholder yield strategy – dividends – claimed the top spot: [Note:  While there is an exclusively Japan buyback index managed by S&P, returns were unavailable, leading to that strategy being excluded.] 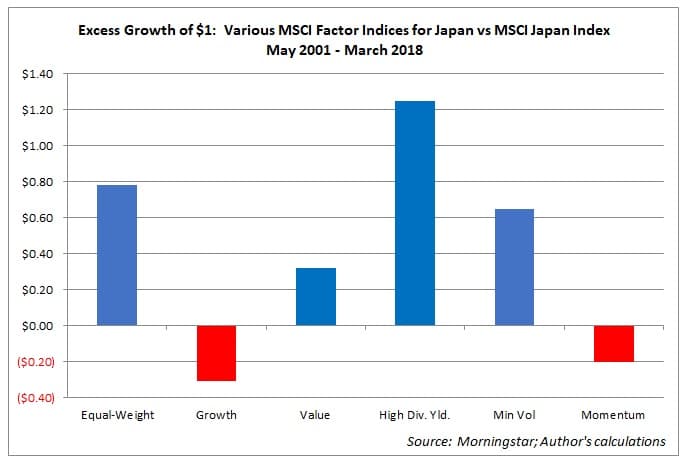 Looking at drawdown durations, however, reveals some interesting, and somewhat counter-intuitive, results.  For example, for the S&P 500, momentum and growth both outperformed the overall index, but each suffered maximum drawdowns that lasted more than twice as long as the overall index’s worst downturn.  Intuitively, however, the top performers, – dividend yield and buybacks, – suffered much less frequent and shorter drawdowns than the index: 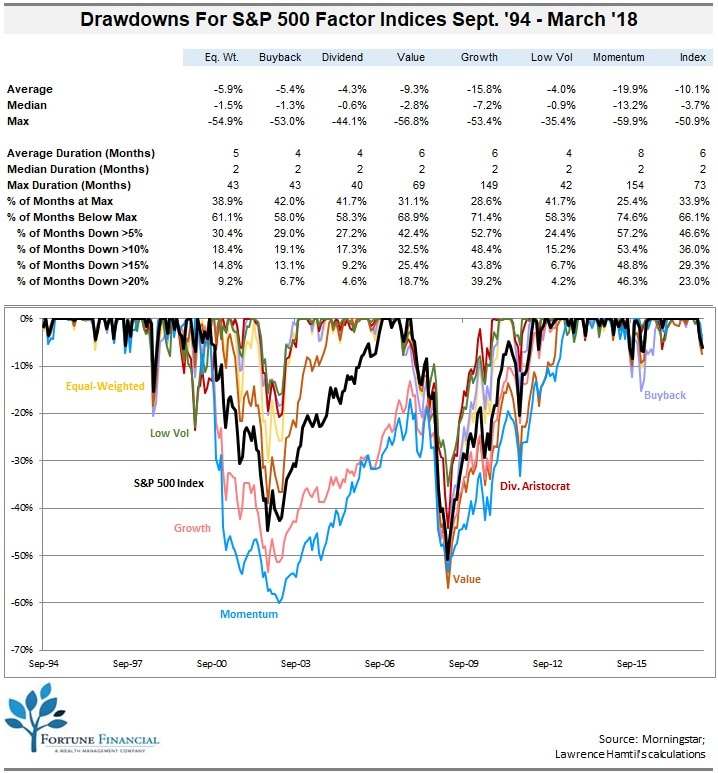 In Europe, there were also some surprising results.  For example, even though equal-weight delivered superior returns, its longest drawdown was considerably lengthier than the index.  This is surprising as one would think an equal-weighted index would be less concentrated among a handful of sectors and companies than a capitalization-weighted index, and thus less prone to prolonged drawdowns.  Unsurprisingly, however, are the strong performances of the buyback and minimum volatility factors, both of which suffered shallower and shorter drawdowns to accompany their strong returns: 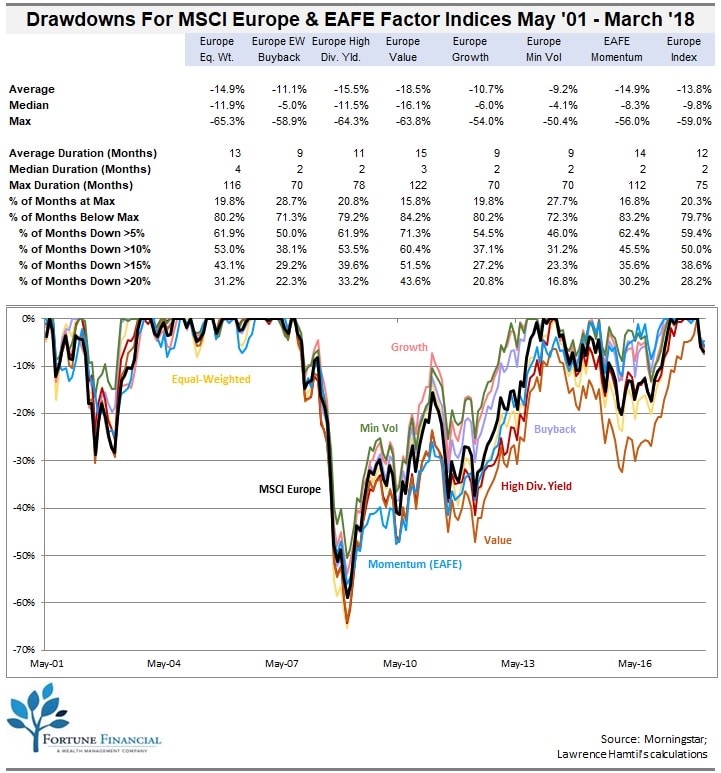 In contrast to its outlier returns, drawdowns for several factor strategies in Japan were similar in nature to those in the U.S. and Europe, with dividend focus, minimum volatility, and equal-weight comparing favorably with the overall market: 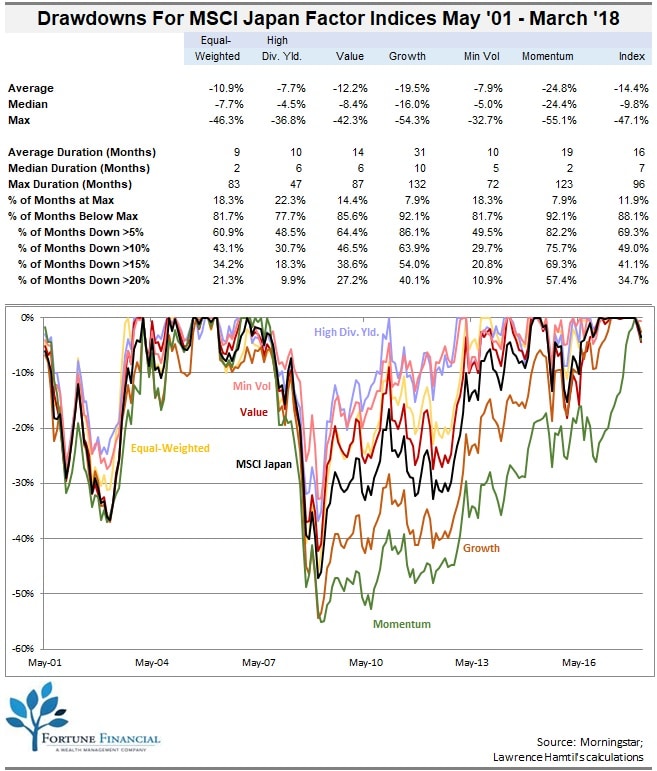 These results tend to support the arguments often made by me and others that strategies that focus on certain factors such as minimum volatility and buybacks tend to do well regardless of the market, and they do so on a more consistent basis.  On the other hand, the performance of certain popular strategies such as value, growth, and momentum tends to vary from region to region.  Obviously, the short time frame studied has skewed the results somewhat, as the data contain only a handful of cycles.  Nevertheless, it seems reasonable to conclude that if investors are interested in the consistency of returns and not just the highest returns, some specific strategies have proven to be more reliable than others in terms of generating them.