I recently finished reading Going Down Tobacco Road which is a wonderful history of the R. J. Reynolds tobacco company by long-time Reynolds employee, Gene Hoots.  Long-time readers know that I have long held an interest in the tobacco industry, and I am very excited to share here a Q&A with Gene about his book, which I consider a must-read for anyone interested in the history of the tobacco industry, whether as an investor or just as a lover of market history.

Our conversation follows below.

You make the observation that tobacco stocks, which trace their heritage to the 19th century, generated the highest return of any American industry from 1900 – 2019, and this despite all the massive technological and healthcare innovations during the same period that in turn created many new industries.   What is so unique about the tobacco industry that made this possible (chart via Credit Suisse)? 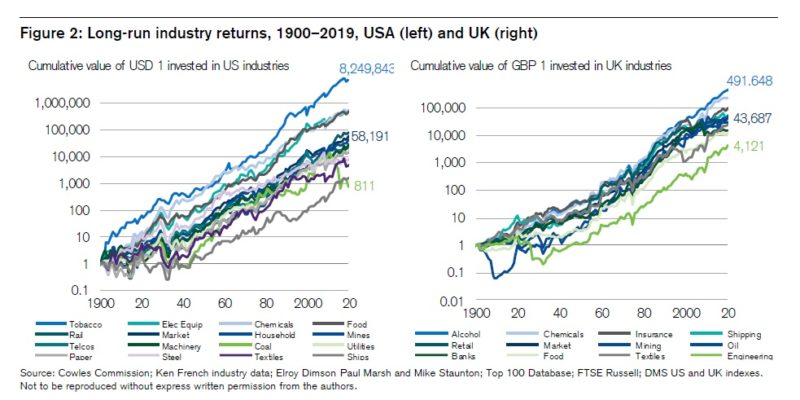 The best explanation is the set of five forces that determine a company’s profitability, laid out by Michael Porter in the Harvard Business Review.  The tobacco industry ranks very high on all five. (1) Threat of new entrants – Launching a new cigarette brand requires enormous advertising, marketing, and promotion. Existing companies have a real competitive advantage. The advertising ban  protected existing brands. A successful new brand is very profitable, but with limited promotional avenues, the gamble is hardly worth the risk. (2) Threat of substitute products – There are few cigarette substitutes. As a “nicotine delivery system,” no other product has satisfied the consumer so well, although vaping may be changing that market dynamic. (3) Bargaining power of customers – How much customers are willing to forego the product to reduce demand and bring down prices. The addictive nature of cigarettes assures that customers will not bargain much on price.  Many continue to smoke with little regard for price. (4) Bargaining power of suppliers – While there may be bargaining power on equipment, labor, and other services related to manufacturing and selling tobacco, the largest cost is the leaf tobacco. And, like any agricultural commodity, suppliers have limited bargaining power. (5) Intensity of competitive rivalry – An oligopoly (only a handful of cigarette manufacturers), is not inclined to engage in price wars that destroy profit margins. For years, the industry raised prices in unison.

It was interesting to read that in the early part of the 20th century, tobacco companies tended to be focused only on their respective regions, and competed mostly with incentives such as discounting, whereas R. J. Reynolds was unique in terms of focusing on brand quality and focusing on a national footprint.  Can you expand on that a little bit and talk about how unique that was at the time?

A national brand approach had not been tried before Camel in 1913 for several reasons. Railroad transport from cigarette plants in the South to national markets were just developing. Tobacco men had not recognized the potential that advertising offered for cigarettes. Most important, like most disruptive events, nobody had put it all together before. This was the genius of Richard Joshua Reynolds who was willing to bet on a new brand name (a dromedary of all things), a new tobacco blend, and a million dollar advertising campaign that simply was unheard of. It all worked, and in less than three years, World War I brought a market of millions of service men who became devoted Camel smokers.

You discuss in depth how R. J. Reynolds shares were closely held, and employees owned the bulk of outstanding stock.  Do you think this kind of incentive-based arrangement contributed greatly to R. J. Reynolds’ performance over the decades?

From 1912, when the special employee stock was created, until about 1960, there was definitely a positive benefit to having the stock locally owned – not by just a few in management, but many in the labor force as well. They saw the results of their hard work and loyalty every year in the bonus the stock paid them. Few towns the size of Winston-Salem had such a profitable enterprise. Unfortunately, after about 1960, the closely held nature of the ownership also had a downside. Success made the hometown management somewhat complacent, suspicious of outsiders, and unwilling to look seriously at markets for their tobacco products abroad.

This complacency can be seen in the table below. RJR gradually lost share of the domestic cigarette market to Philip Morris and their Marlboro Man marketing campaign. Around 1982, Philip Morris captured the top market share.  RJR management had declared that they were not concerned with the Marlboro threat because Philip Morris was taking share from everyone besides RJR, which stayed in the 33-35% range. But once, Philip Morris surpassed RJR, the decline in RJR’s share accelerated, and by 2000, RJR claimed only a 22.7% share, while Philip Morris’ share approached 50%.

Tom Russo likes to draw a comparison between Nestle, which had to have a global approach due to Switzerland’s small domestic base, and Hershey, which, despite having all the “free” advertising by GIs during World War II, ignored global expansion in favor of focusing on the US market after the war.  Do you think that is approximately what happened to R. J. Reynolds in the latter half of the 20th century when it lost out to Philip Morris, which had a more global view?

That is almost exactly what happened.  While RJR did have international operations, management was content to be number one in the U.S. market and did not respond strongly enough to markets abroad. Management proudly noted, “We can see everything we own from the top of the Reynolds Building” (a twenty-one story headquarters building in the center of town, designed as a miniature model for the Empire State Building). Philip Morris accurately assessed the potential abroad and acted on it ten years earlier that RJR. The Philip Morris people, headquartered in New York City, had a broader world view.

Can you talk a little bit about how “Marlboro Friday” and the MSA contributed to Philip Morris dominating the industry at RJR’s expense?

On Friday, April 2, 1993, Philip Morris announced a preemptive strike against generic cigarettes in general, and RJR in particular, with a 20% price cut for Marlboro.  The Philip Morris stock lost 26% that day, but the longer term impact was in Philip Morris’ favor. It led to Philip Morris’ increased dominance of the industry. In early 1989, KKR acquired RJR Nabisco in a leveraged buyout that laid a debt burden of nearly $30 billion on the company.  The interest was about $10 million a day, and KKR struggled to service that debt by selling assets and cutting costs.  RJR Tobacco had no surplus funds and could ill afford to go head to head with the Marlboro Cowboy in marketing.  Philip Morris had already been toying with a weakened RJR for three years “like a cat with a mouse,” and this was a major blow to establish market share superiority.

The MSA, or Master Settlement Agreement, was made in 1998 among the four major U.S. cigarette manufacturers and the attorneys general of all the states.  It, with other supplemental agreements,  provided for payments to the state governments, their attorneys, tobacco farmers, and the Food and Drug Administration, billions of dollars annually in perpetuity, based on cigarette consumption and inflation. Over a fifty year period, the total could reach $1.7 trillion. Such a staggering sum would seem to toll the death knell for any industry, but not so for tobacco. Two things happened that show its resilience.  With a mere shrug, the industry was able to cover all these added costs by raising cigarette prices only $.45 a pack, even allowing them to increase profits slightly. All tobacco companies benefitted because the MSA reduced the risk of health related lawsuits that had plagued them for decades. But to Philip Morris’ great advantage, the MSA called for all cigarette promotion to cease, virtually locking in place the coveted market share that is the lifeblood of the industry.  Since Philip Morris controlled by far the greatest market share, this stand-still arrangement benefitted it the most.

What do you think is the future of the tobacco – or, perhaps more precisely, the nicotine industry?

I will begin with the caveat that I am better at recording history than at predicting the future. But we can learn from history. Since the introduction of tobacco in Europe in the early 1600s or before, Czars and Kings tried to outlaw it.  But they soon learned that a tobacco tax was a great revenue producer, and, ever since, governments have been ambivalent about the product.  They recognize it as undesirable from a health perspective, but they can no more overcome their addiction to the money it brings them than can the people who use the tobacco. In the 57 years 1949-2016, federal excise tax per pack increased from $.07 to $1.01, 4.8% a year.  State excise taxes rose even faster, from $.031 to $1.39, 6.9% a year.

Looking ahead, those people with whom I have spoken in the industry believe that the demand for nicotine products will slowly decline as people become better educated about its health hazards. However, consumers will continue to demand the product in one or more forms, especially in countries with emerging economies.

Where can readers find your book or get in touch with you?

Going Down Tobacco Road is available at Amazon.com Kindle Books and additional information on the RJR story and tobacco history can be found at the website www.GoingDownTobaccoRoad.com. I can be reached by email at hootsencore@gmail.com or by phone at 704-277-4553. As time permits, I will do my best to respond to enquiries.