Recently, the Indexology Blog produced by S&P Dow Jones published an interesting article showing that when sectors become excessively concentrated, – meaning that relatively few companies constitute a large portion of the sector, – sector portfolios that are equal-weighted (that is, more exposure to smaller companies) are subsequently likely to outperform (graphic via SPDJ): 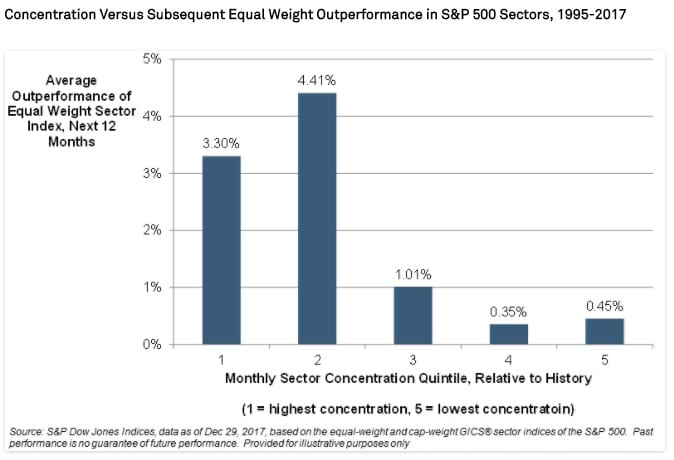 I found this line of reasoning very interesting, and I wondered if it could explain why the small company premium (that is, the excess performance of small company stocks relative to large company stocks) has been much higher in other countries than in the U.S.

Before diving in, readers should be reminded that among individual country markets, really only the U.S. and Japan can be considered truly diversified: 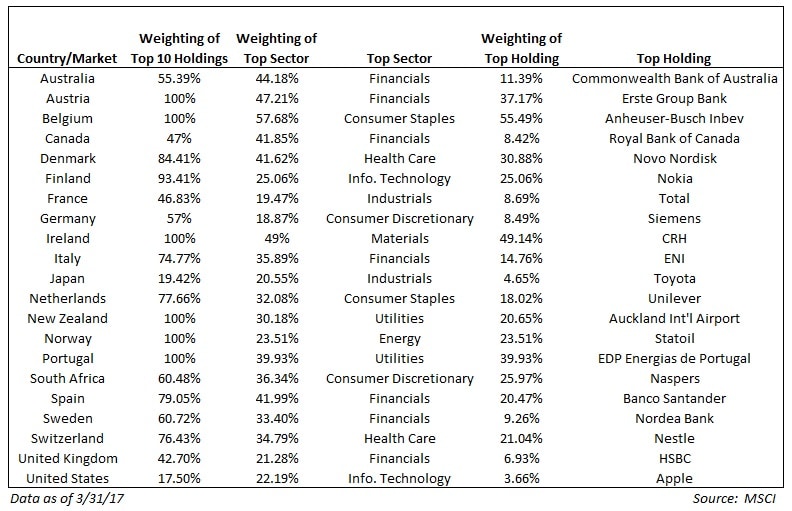 Based on SPDJ’s finding, and given this excessive concentration with most individual equity markets among a handful of companies or sectors, it follows that individual country small company portfolios (which tend to be far more diversified than their large counterparts), should deliver higher returns, given not just their exposure to the size factor, but also due to their enhanced diversification.

I tested the small company premium by country by calculating annualized excess returns for each country’s small company index relative to the parent index.  I grouped the countries into quartiles based on the concentration of the top ten holdings of the MSCI parent index, with the first quartile representing the most concentrated markets.  [Note:  Since there are 21 countries in the sample, the first quartile actually has six countries:  the six in which the top ten holdings represent 100% of the parent MSCI index.]  Similar to the sector results in the S&P Dow Jones study, it can be seen that the small cap premium has been highest in the most concentrated markets, and falls off a bit in the more diversified markets: 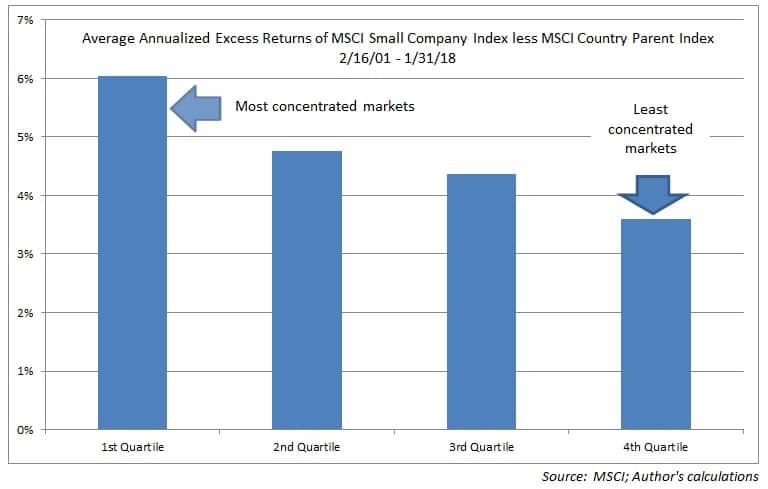 February 16th, 2001 was the common start date for the various small company indices, so that is a period of roughly 17 years.  To dig deeper, I wanted to look at other time frames as well, such as the last five- and ten-year periods.  The results were varied among the different countries, but were generally consistent in terms of small caps doing best in the most concentrated markets over longer timeframes: 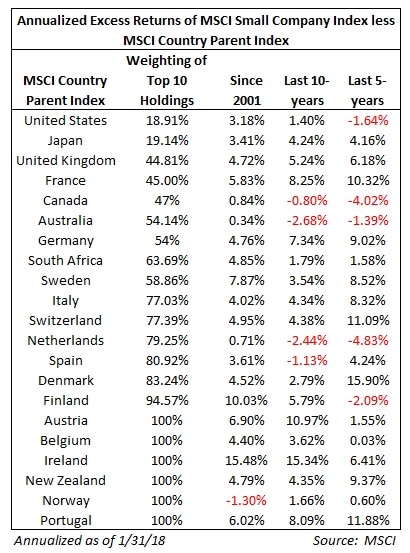 There were a few notable exceptions, of course.  In the U.S., the spread was comparatively anemic, which can be attributed to its unmatched diversification even among large companies, and also perhaps to its dynamism, which has worked to arrest if not lessen its concentration over time.  Other countries like Norway, Australia, and Canada are also interesting exceptions, but a possible explanation for their muted spreads could be their high correlations with commodity cycles.

For example, Norway’s equity market, both among large and small companies, is heavily concentrated in the energy sector.  Similarly, even though financials constitute the largest sector within both the Canadian and Australian markets, they are both highly correlated with moves in natural resources, with Canada closely tracking oil and gold prices, and Australia closely following industrial metals such as copper.

We can observe this phenomenon by comparing excess performance for Australian small caps relative to Australian large caps with the changes in the price of copper: 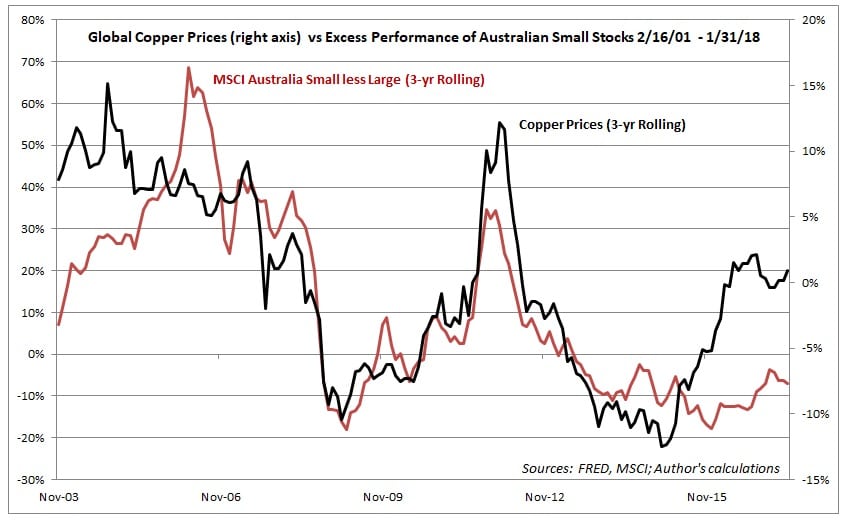 This is similar to what has been observed within U.S. energy stocks over time.  The boom-and-bust nature of the commodity business typically means that small companies perform extremely well during the boom, but the subsequent bust more or less wipes out any excess returns, thus leading to a historical outperformance for larger energy companies.  If this is the case, then the extreme cyclicality of small companies in resource-heavy markets would make their relative performance inconsistent at best, and that seems to be the case in these instances.

The financial crisis from 2007 – 2009 could also explain a good deal of the strong small cap outperformance in many markets.  Markets in countries like Italy and Austria are heavily concentrated in the financial sector, which suffered greatly during the crisis and in its aftermath, so it is not entirely surprising that their small company counterparts, with far less financial exposure, delivered much higher returns.

The time frame of this study is another limitation, as the 2001 – 2018 period basically encapsulates two full cycles, so that has to be considered as well.  However, these admittedly very basic observations seem to indicate that market concentration likely does explain a good deal of why foreign small companies in those markets have been better opportunities for investors.