In January, I broke down data for large and small cap stocks, both at the index and sector levels.  What I found is that stocks in similar industries, whether large or small, exhibited to a large extent similar volatility and return characteristics.  I recently took this analysis a step further, plotting volatility against returns for small, large, and midcap stocks: 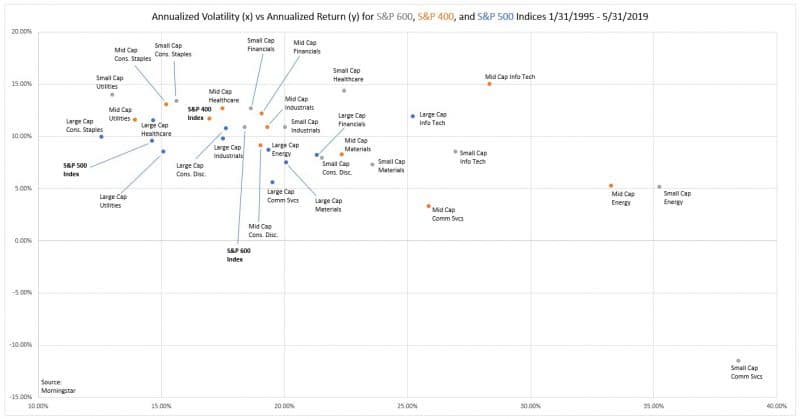 The midcap sector data generally matched those of the large and small cap sectors, which strengthens my belief that, fundamentally, risk – as defined in this case by volatility, and, a bit later on here, by drawdowns, – is largely a function of fundamental characteristics of a given sector or industry than it is a function of size.

For example, across the size spectrum, so-called “defensive” sectors like consumer staples, utilities, and healthcare tended to exhibit a lower ratio of return vs volatility than other sectors, while more cyclical sectors such as energy and materials demonstrated the opposite relationship.  Similarly, the “defensive” sectors suffered through shorter and shallower drawdowns than their cyclical counterparts, again regardless of size [Note – In this case, I chose to leave out Communications Services and Real Estate from the analysis due to the recent overhaul of the former, and the recent introduction of the other]:

Another observation is that over this lengthy period, the ‘consistency’ of returns was generally similar across sectors, again regardless of size.  For example, the defensive sectors again posted either very shallow or positive minimum (that is, worst returns over any sixty-month rolling period) sixty-month total returns, whereas the cyclical sectors, – particularly financials and tech, – each posted considerably worst minimum sixty-month results: 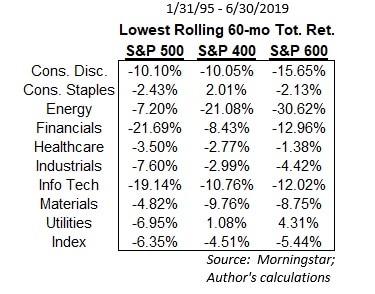 To me, the evidence here suggests that while style boxes and broad categorizations like “small caps” and “large caps” make the discussion of investing much easier, they also mask the fundamental natures of the companies these sectors and indices represent.  It should come as no surprise, really, that, for example, small consumer staples stocks enjoyed lower volatility and shallower drawdowns than large energy stocks, or that large cap financials were far more volatile than midcap utilities.

A further takeaway for me is that midcap stocks typically stole the show when it came to returns and ‘risk’ characteristics, outperforming large caps and small caps in all but a few sectors in terms of annualized total return, shallower and shorter drawdown duration, and minimum sixty-month returns.  This further supports the argument I made a few weeks ago that midcaps have, at least in the past, enjoyed being the sweet spot of the market.

I have made the comment in previous posts that a worthwhile portfolio construct would be to start not from the global market capitalization weights but from global sector weights, and implement a portfolio based on the highest quality companies in each sector, regardless of geography.  To take that argument a step further, it would seem worthwhile to enhance this idea by expanding the pool of candidates across the size spectrum as well.