Jonathan Fell founded Ash Park with three colleagues in 2013, after a 20-year career in sell-side equity research covering Tobacco and Beverage stocks. Ash Park, based in London, created the concentrated and low-turnover Global Consumer Franchise strategy as a way of combining wealth protection and good long-term capital growth for investors, via exposure to a high-quality, global portfolio of branded consumer companies. Jon is a friend of mine, and I am pleased to discuss with him here one of my favorite topics:  consumer staple stocks.

It seems like most financial writers focus on the stellar returns of their favorite market sector over time, but Ash Park takes a slightly different approach: each of your quarterly letters starts with a graph that shows that global Staples have not suffered a negative 5-year period starting from December 1972.  Why do you think this is significant and what characteristics unique to global staples have contributed to such a favorable result?

JF:  We’re aiming for long-term growth with our strategy – and the sector’s returns have been excellent – but wealth preservation’s an important goal too, hence the significance of the sector not having lost money in any five-year period in getting on for 50 years.

What we love about the Staples companies is that they can sustain super-normal profits over the very long-run, supported by the strength of their brands and franchises. And we think that’s something the market consistently underappreciates. Of course these products tend to be defensive too: when times are tough people still need to eat, drink and wash, and they typically turn to products and brands that they love and trust.

JF:  We actually have a strongly-held view that it’s the quality of a company’s management, culture and people that really matters most, more than the category it’s exposed to. A good company will always find a way to delight its consumers and grow – even with things as apparently mundane as air fresheners or trash bags – and there are brilliant brands across each of the Staples industries.

But we do think Beauty and Personal Care has a good tailwind: there’s a limit to the quantity of food, drink or tobacco you can consume, but fewer constraints on how much you can spend looking after your body or your appearance. It’s the one Staples sector where consumer spending has consistently out-stripped GDP growth. And gross margins are high – typically 70-80%, so the companies have massive firepower to invest behind their brands. 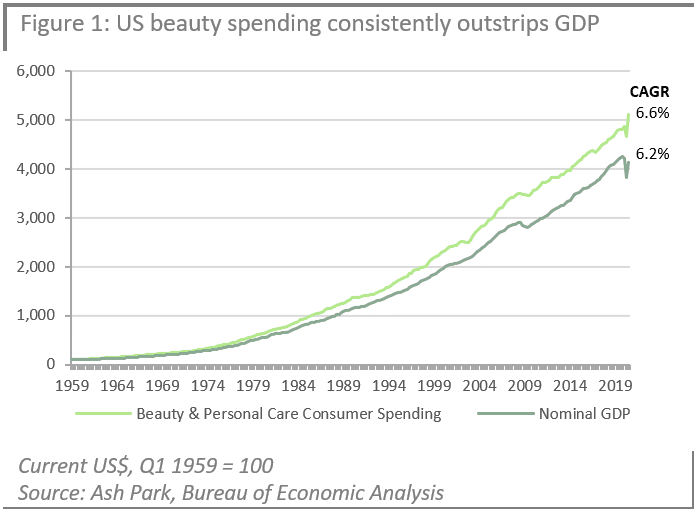 A good packaged foods company might have 35-40% gross margins, so that’s a tougher starting point. And outside a few areas – chocolate and confectionery would be an important exception – creating strong brands can be tougher, not least because it’s a very diverse category, tastes are quite local, and lots of people like to cook their own food.

Tobacco’s a special case. It has challenges which are well known, but in recent times the valuations have been pushed to what we think are absurdly cheap levels when you consider how resilient the consumption base actually is, the pricing power these companies have, and the longer-term opportunity to shift consumers into much less harmful ‘next-generation’ products like vapes or nicotine pouches. So we’re very excited about the Tobacco portion of our portfolio.

A common argument among consumer staples bears is fear of disruption by lower cost competitors who will sap away market share from major brands. How does Ash Park think about the possibility of disruption and the threat it poses to core holdings?

JF:  Well we fight very hard to make sure we’re not complacent about this, but the risk to well-managed Staples businesses from smaller or direct-to-consumer brands seems over-hyped. Large branded consumer companies have been buying and bringing to scale smaller brands for decades. The best way to put this in context is perhaps to think about what’s happened to and is still going on in, for instance, the Retail, Finance, Autos or Airlines industries. Almost everything seems more disruptable than Staples. In a way, what more disruptive an event could you have had than Covid-19? Big, well-managed Staples brands seem to be coming out of this stronger than ever because they have the resources, know-how and consistency of delivery to manage through turbulent times.

How does Ash Park view the opportunity set in emerging market consumer staples companies? Do you think any of the major EM staples will ever come to rival those from Europe and North America for global supremacy?

JF:  Over the longer run there should be a strong per-capita growth-driven story in emerging markets, but the question is how to play it. To access that growth opportunity you’ve got a fairly limited choice of quality businesses which are directly listed in the EMs themselves, and they’re often on really expensive multiples. But embedded in the global businesses are some of the best EM consumer companies out there, with many decades of experience operating in these markets, high governance standards and of course diversification. For our strategy around 40-50% of look-through, underlying sales typically come from EMs, and we think that we get exposure to these markets which is both better quality, and cheaper, than we would if we tried to invest in them directly.

You could argue that in Beer, what is effectively a Brazilian company – AB InBev – has already risen to global dominance. So it can happen, though it’s not easy because so many assets are already in the hands of the large US and European businesses.

In your third quarter 2019 letter, “The Perfect Investment,” you list several qualities of what would make the perfect investment: a growth mindset, skillful capital allocation, attractive valuation, and so on.  Can you expand on this a little bit?  How realistic is it to think many companies exhibit several of these characteristics at once?

JF:  I think it’s really important to have a clear view of what you’re looking for in your investments: the right behaviours, attitudes and set-ups that should be able to sustain long-term growth and a great return on capital. Having that well-defined framework simplifies the process of looking for new stocks and reduces the time you spend chasing down blind alleys. We’re not looking for the best-performing stocks in any one year, we’re looking for companies that can win year after year after year.

We know that no company is perfect, and we wouldn’t be doing our job properly if we didn’t identify potential red flags. We started that letter with a quote from Vince Lombardi which sums things up well: “we are going to relentlessly chase perfection, knowing full well we will not catch it, because nothing is perfect. But we are going to relentlessly chase it, because in the process we will catch excellence.”

“The Perfect Investment” features one of my favorite charts that shows the multiple one could have paid in 1973 and still realize a 7% CAGR (price only) through September of 2019:

Alongside the chart you write, “the market is generally very poor at recognizing the longevity of cash flows from successful consumer staples companies.”  Why do you think this has been the case historically?  You read of tech bubbles and even utilities bubbles in the 1920s, but staples always seem to be overlooked.

JF:  Yes, lots of people seem to like this chart, including a certain well-known fund manager who’s grabbed it for the introduction to his new book! Cheeky, but you could say flattering too. I suppose the ‘Nifty Fifty’ episode of the early ‘70s was the closest we’ve come to a Staples bubble, which is slightly ironic: the time people thought valuations on these stocks were crazy might be the nearest some of them have been to being valued properly.

It’s easy to dismiss high-quality consumer companies as boring. There’s nearly always something more eye-catching in the market, something apparently growing more quickly, with a better ‘story’. But the thing about Staples companies is that if they look after their brands properly, if they keep investing and innovating, they can carry on growing pretty much indefinitely – whereas many of the supposed hotter stories fade at some point and then new winners emerge in those sectors. Owning Staples is a time-efficient strategy because you don’t have to worry about finding the ‘new new’ every couple of years, with the reinvestment risk that entails. It’s a patience arbitrage that works through delayed gratification while excitement trades at a premium.

Kingsway Capital Partners Limited (“Kingsway”) is authorised and regulated by the Financial Conduct Authority in the United Kingdom (the “FCA”). Ash Park is a division of Kingsway. Kingsway does not offer investment advice or make any recommendations regarding the suitability of its products.  This communication does not constitute an offer to buy or sell shares or interest in an Ash Park Fund. Nothing in these materials should be construed as a recommendation to invest in an Ash Park Fund or as legal, regulatory, tax, accounting, investment or other advice. Potential investors in an Ash Park Fund should seek their own independent financial advice. The offering materials may only be distributed in accordance with the laws and regulations of each appropriate jurisdiction in which any potential investor resides.

Past performance is not necessarily a guide to future performance. Kingsway has taken all reasonable care to ensure that the information contained in this document is accurate at the time of publication, however it does not make any guarantee as to the accuracy of the information provided. While many of the thoughts expressed in this document are presented in a factual manner, the discussion reflects only Kingsway’s beliefs and opinions about the financial markets in which it invests portfolio assets following its investment strategies, and these beliefs and opinions are subject to change at any time.