A few years ago, I wrote an article titled, “The Value of Lasting Moats,” in which I made the argument for a few select industries in which the incumbent players enjoy competitive advantages, or “moats”, that are extremely durable:

“The reason I think a lasting moat is important to consider is because history is full of examples of wide-moat companies that were disrupted by new entrants (think Apple upending Nokia), or new technologies that not only narrowed the moats, but shattered the companies (think digital photography crushing Kodak).  It goes without saying that no moat is invulnerable, but I do think that certain industries and companies do enjoy something close to permanent moats, perhaps because their products and services are less likely to be substituted for, or because geography or regulation have made them pseudo-monopolies.”

The industry examples I cited then were tobacco, an industry protected by tremendous regulatory burdens that can overwhelm would-be new entrants; railroads, which, along with their scale and efficiency command the logistics of entire regions; and airports, which are monopolies for air traffic in their specified regions.  Not only do these industries have what appear to be competitive advantages for the next few years, but perhaps even for decades ahead as substitute goods or disruptive technologies seem to constitute minor threats if at all to their market positions.

Using this same reasoning, I would like to add defense companies, waste management companies, and specialty chemicals to this list of “wide moat” industries.  My arguments are as follows:

Defense companies – Unlike mostly civilian businesses such as airline manufacturers or automakers, weapons manufacturing is highly sensitive to security concerns, so the main customer of defense firms, the United States government, is virtually guaranteed to do business with domestic firms.  In addition, modern weapons systems are extremely complex and require years to develop, which means a lengthy process of project approval, development, and so on, a factor that on its own deters would-be new entrants from attacking the profit pool.  On the other hand, the complexity and duration of these projects, not to mention their immense importance, creates a unique, almost symbiotic relationship between the U.S. government and defense firms, a fact that only increases already heightened switching costs.  So high are the barriers to entry in defense that the Wall Street Journal recently reported that from 1991 – 2006, roughly 80% of new firms that sought to work in the space quit.  Sadly, human nature dictates that conflict among nations will be forever with us, and as technology develops at ever increasing speeds, the need to keep the U.S military a step ahead of its rivals seems to ensure the relevance and market positions of incumbent defense firms.

Waste disposal – At first glance, you might think that trash collection is anything but glamorous, especially in a world of high technology.  Yet our economy is founded on consumption, and consumption means trash.  Lots of trash.  That simple fact, combined with the economic sensitivities pertaining to trash collection, mean that incumbent waste management firms, particularly the larger firms which enjoy the advantages of scale, operate in an industry the services of which which all consumers need, but which has the advantage of being highly insulated against new competition by government controls such as licensing requirements and strict environmental safety regulations.  Another important advantage enjoyed by the larger waste disposal firms pertains to the landfills they operate, which Morningstar analyst Brian Bernard observes in a recent note, “must adhere to strict, federal, state, and local environmental regulations that dictate design, construction, operation, monitoring, and closure.  Landfill operators must also possess the resources to deal with NIMBY [“not in my backyard”] opposition, which can be costly, time-consuming, and politically charged.”  These regulatory burdens, along with the geographic and behavioral nature of the service, – stated simply, we will always need trash disposal at our residences and places of work, – should create a distinct competitive advantage of these firms for a very long time.

Specialty chemicals – Because their products are made for specific and critical uses, specialty chemical producers benefit from high switching costs in the form of high pricing power.  In many ways, these specialized chemicals resemble what Seilern Funds’ Marco Lo Blanco describes as ‘mission critical; non-core‘ components of the production process.  Such components are essential but are still small enough parts of the overall product that their cost is not of great concern, especially as the low cost substitute may be of inferior quality, and thus could sabotage the finished product.  This stands in stark contrast to the producers of more commoditized products, which enjoy little pricing power as they face intense competition from many other producers.  This is evident in the returns of the various chemical subindustry indices over the last decade-plus: 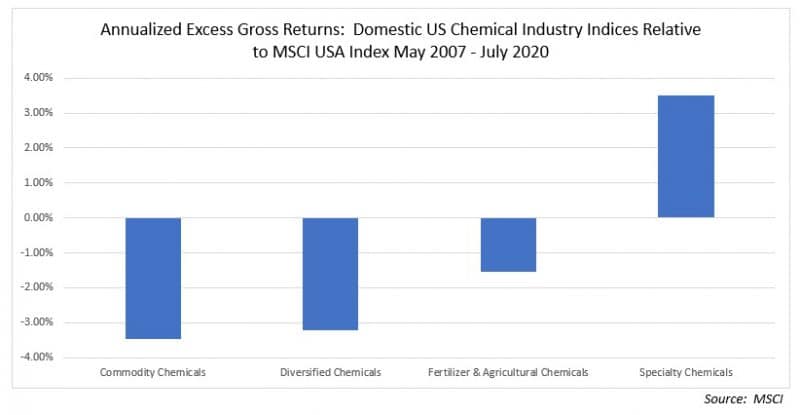 Now none of this is to say that these particular industries will generate substantial excess returns in the years ahead; after all, as we have noted previously, a wide moat by itself is not always sufficient to produce stellar industry returns, especially when valuations are rich, as may currently be the case in some instances.  Yet the very long-term investor must acknowledge that not all moats are created equal, and these industries which we have highlighted seem to enjoy moats that should prove durable for decades to come.

*Morningstar wide moat research was consulted for some of these examples and cited when quoted directly.