The tendency of investors to weight their portfolios heavily toward domestic stocks is known as “home country bias”, and the dangers of doing so are rightly repeated often by financial professionals.  However, in my opinion, one portfolio bias that is less discussed is “sector bias”, by which I mean the heavy tilts in a portfolio to one or two hot sectors.  This danger seems especially relevant given today’s popularity of passive investing based on capitalization-weighted indexing.

Examples of sector bias in passive indices is easily seen in this graphic from Janus Henderson, which shows the high technology weighting across various global equity indices: [Note:  The sector reclassification that took place last month means that technology’s weight, at least in the U.S., is much less than it was prior.  However, this is, in my opinion, merely a cosmetic transformation.]

In corresponding fashion, as technology shares have claimed the lion’s share of the index, traditionally defensive sectors and industries such as consumer staples and utilities have fallen, as Leuthold’s Jim Paulsen pointed out earlier this year (via the FT): [Note:  the MSCI USA index (cited above), and the S&P 500 index (cited below), are roughly similar, so the comparison works in this case.] 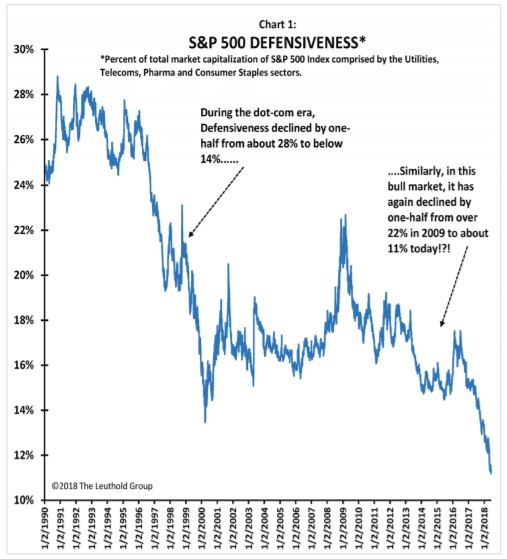 These are important developments for investors, especially index-only investors, because arguably sectors matter more than regions or countries in this globalized marketplace.  After roughly a decade of economic expansion and low inflation, not to mention a somewhat unprecedented bull market in technology stocks, passive investors may find themselves exposed to a surge in inflation, or an economic downturn.

Consider this table by S&P, which I have cited before, and which shows the different relationships across market sectors relative to macro factors such as inflation and unemployment: 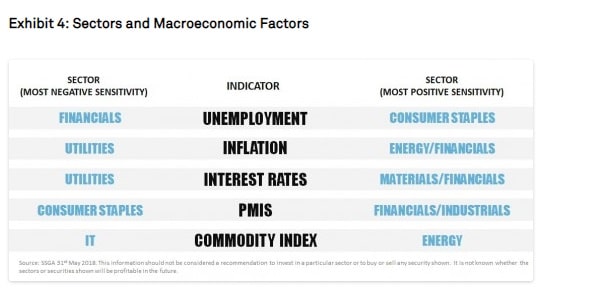 Noting these relationships, we can see in the data that, for example, consumer staples, – basic products people tend to buy regardless of their economic situation, – have fared better than consumer discretionary stocks whenever jobless claims have risen.  In fact, roughly a third of the periodic outperformance of consumer staples relative to consumer discretionary stocks can be explained by trends in jobless claims alone: 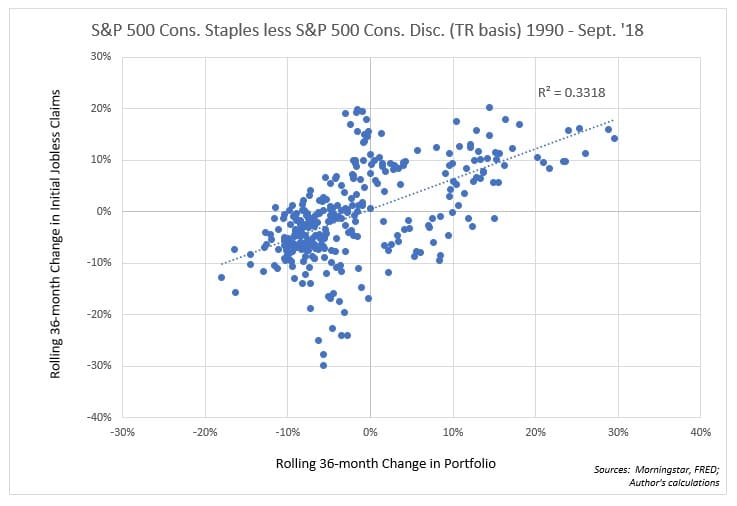 Similarly, the last few years, while kind to technology shares, have not been kind to energy prices and commodities, with index exposure to both the energy sector and commodity-sensitive materials stocks dropping to very low market shares relative to history.  However, it is unlikely that these trends will last forever, and a heavy tech concentration at the expense of commodity exposure may cost passive investors if prices rise for natural resources: 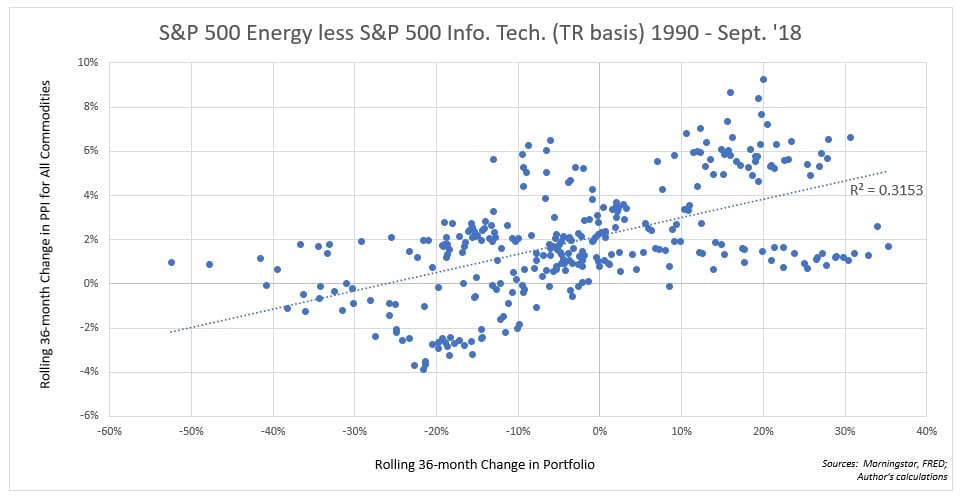 In some ways, a continued heavy tech concentration relative to a sector like energy is an implicit bet on a strong dollar; around 25% of tech’s period outperformance relative to energy stocks can be explained by the dollar strengthening: 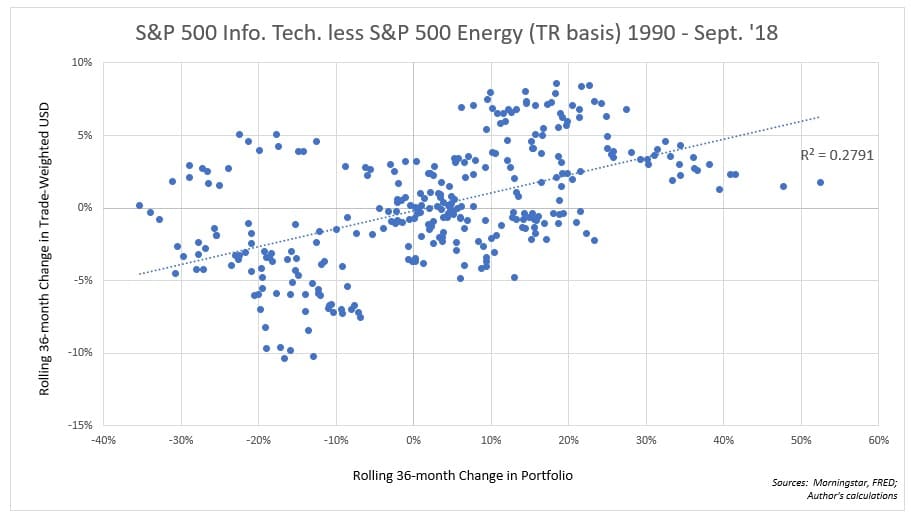 It is unlikely, of course, that the next cycle will be as favorable to dollar strength as the current cycle has been, if recent history is any guide.

The lesson here is that investors should take note of their sector exposures and make note of some of the implicit bets they may be making.  If, for example, they find they are overly concentrated in a few sectors that are heavily influenced by benign inflation and positive economic growth, they may want to consider bolstering their exposure to energy or defensive sectors, etc.  A key to successful long-term investing is surviving in the short-term, and investors would do well to remember that the best way to survive is by balancing their portfolios not just across regions but across sectors, ensuring that their sensitivities to changes in the macroeconomic environment are not overly large.