A recurring theme in my articles has been the importance of industry-level economics to the success of an investment; it is not uncommon for all participants in an industry with favorable dynamics to outperform, and, similarly, it is all too common for even the best operators in a poor industry to underperform.  However, industry importance is not limited to economics; competitive structure is crucial as well.

Most quality-oriented investors seem to prefer an oligopolistic structure in which the incumbents have strong entrenched positions whose steady profits are protected by high barriers to entry.  As GMO observed in their 2012 Profits for the Long Run:  Affirming the Case for Quality, the limited competition within an oligopoly all but ensures a continued defiance of the laws of mean reversion:

While antitrust laws prevent monopolies from engaging in blatant anti-competitive behavior, oligopolies can and do create barriers to shield themselves from competitive forces.  For example, the tech sector has become quite adept at the preemptive acquisition as a form of moat maintenance.  The competitive equilibrium model so beloved of standard economics is much less relevant than we are taught to believe.

The authors go on to demonstrate that returns on equity have been relatively stable for the most profitable companies over time, implying their unique industry structures have kept them insulated against material new competition which would have eroded their profitability (source GMO): 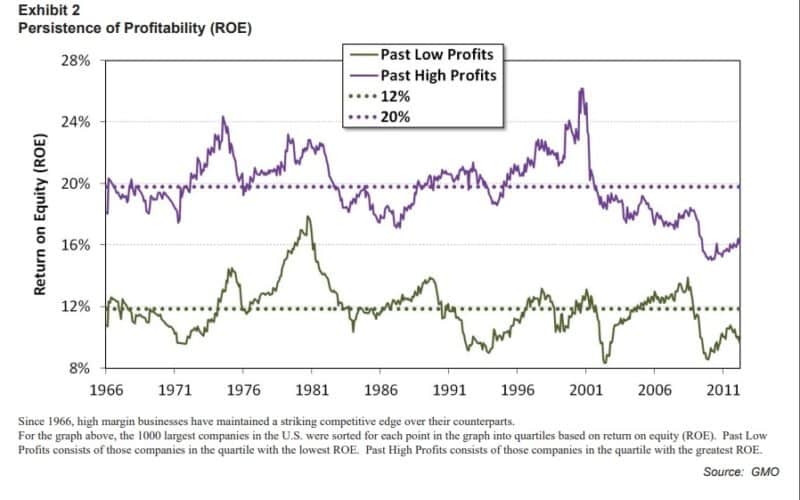 Another advantage to the oligopolistic structure is that stronger firms can focus on the gradual acquisition of market share at the expense of weaker players.  In his wonderful book Quality Investing, Professor Lawrence Cunningham writes:

Beating multiple competitors all of the time is impossible, so companies tend to focus on fighting weaker competitors whilst leaving the stronger ones alone.  Such an environment prevailed for years in the hearing aid market, and this ultimately resulted in the two dominant makers — Sonova and William Demant — consistently taking share from weaker competitors…As a general rule, an oligopoly is preferable to a fragmented and volatile competitive landscape.

While I generally agree with GMO and Professor Cunningham that oligopolies are ideal for finding high-quality investment ideas, there are implied mathematical limits to such an industry structure.  For example, an oligopoly of perhaps four or five major players of roughly equal market share seems to ensure stability, and rationality when it comes to such things as competitive pricing, but that stability almost certainly comes at the expense of capping major upside; in stable industries market share gains are acquired over time and slowly at that.

For major winners, the optimal industry structure seems to be highly fragmented, as consolidators have the opportunity to acquire market share much more quickly, and to a far greater degree.  Furthermore, it is industries that are generally economically insensitive and service-oriented that present the best opportunities for such massive consolidation.

Consider the auto parts retail industry, which a couple decades ago was so fragmented that the top five players controlled less than 5% of the market.  Fast forward to 2022, and major players such as AutoZone,  O’Reilly, and Advance control roughly 40-45% of the market, the consolidation of which came at the expense of much smaller, less efficient players, who were either acquired or forced out.  The performance of the trio has been stellar; even the weakest performance of the three was better than market-average: 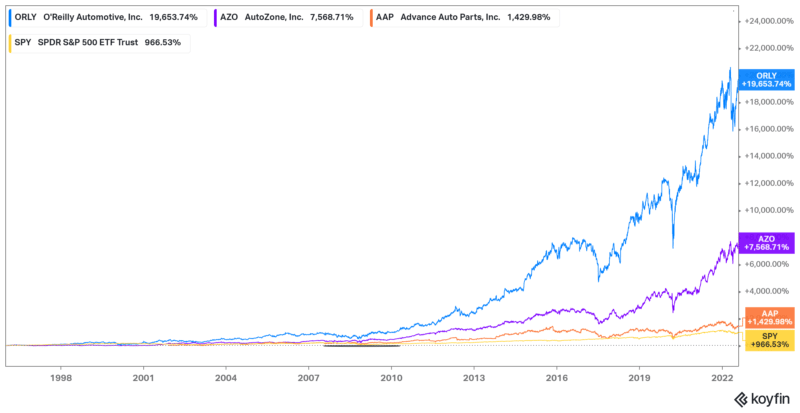 This strategy of taking service-based and extremely fragmented industries and consolidating them was how Wayne Huizenga made a fortune several times over, first with trash collection when he founded Waste Management, then with Blockbuster in video rental and AutoNation in auto dealerships.  Alain Bouchard followed a similar script as he built his convenience store empire with Alimentation Couche-Tard.  SCI and Rollins are attempting to do this in funeral homes and pest control, respectively, and, thus far, the results have been stellar.

To sum it up, I would say that oligopolies are generally optimal for stable cash extraction, but fragmented industries that are ripe for consolidation are likely where investors will find some of their biggest winners.  This seems particularly true in everyday service industries with low economic sensitivity and specific skills such as plumbing, veterinary, and HVAC as demographics dictate an exit for many self-proprietors with generational wealth transfers and liquidity front and center of their minds.

Disclosure:  Both the author and clients of Fortune Financial Advisors, LLC may own positions in any securities mentioned.