At the turn of the twentieth century railroads were the growth industry du jour, with hundreds of railroads competing for capital investment and freight business.  In fact, railroads dominated the stock market, representing close to two thirds of total stock market capitalization in the United States [via Credit Suisse]: 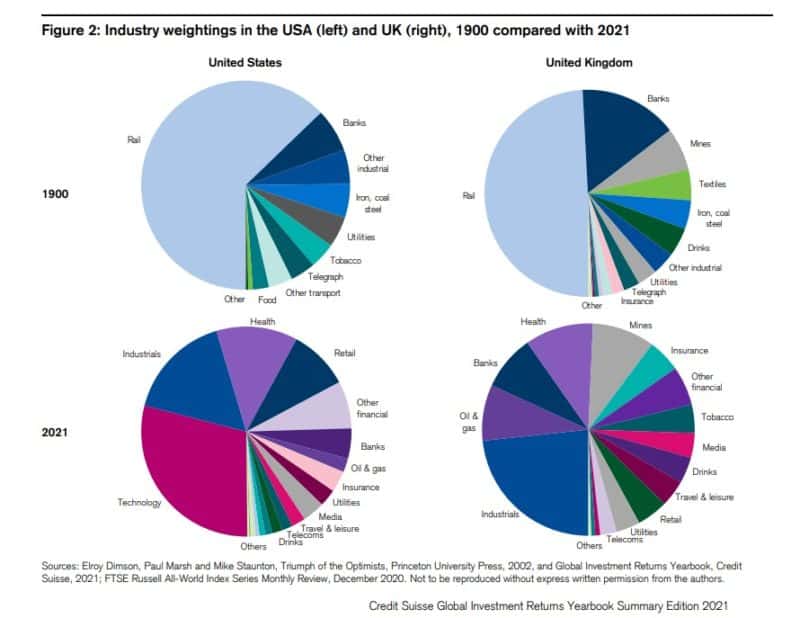 Fast forward to current times, and railroads represent less than one percent of U.S. stock market capitalization.  Since the Staggers Act deregulated the railroad industry, a wave of consolidation took hold, and there are now just a handful of Class I railroads still operating [via David Hunkar]: 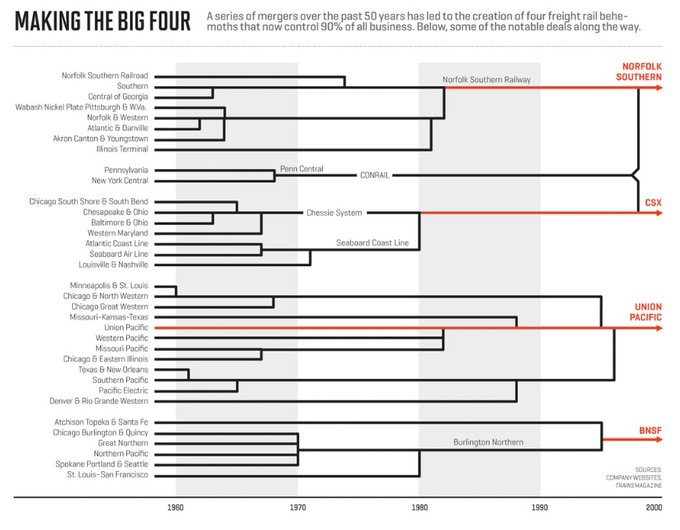 The number of industry participants is not the only shrinkage the industry has experienced; over the last several decades, freight traffic has declined, with volumes only partially offset by growth in intermodal volumes: 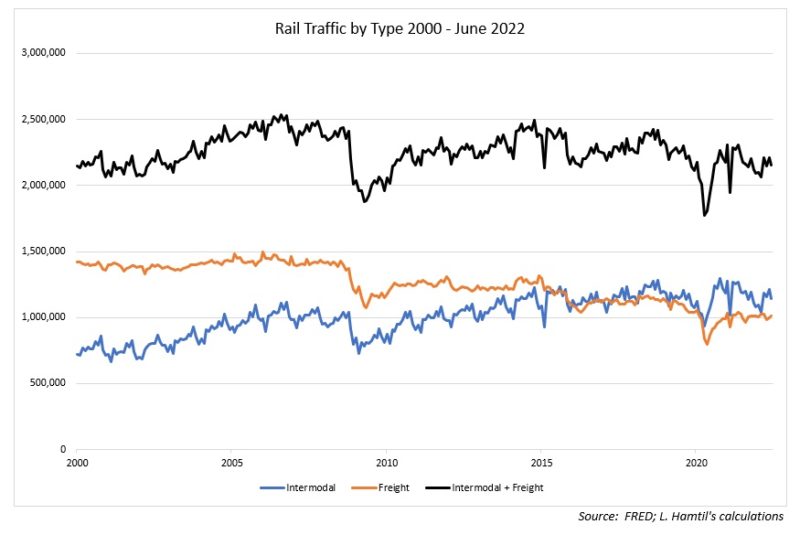 Given what has been a seemingly bleak backdrop for industry growth prospects, how is it possible that U.S. railroads have vastly outperformed the broader stock market over the last five-, ten-, and twenty-year periods? 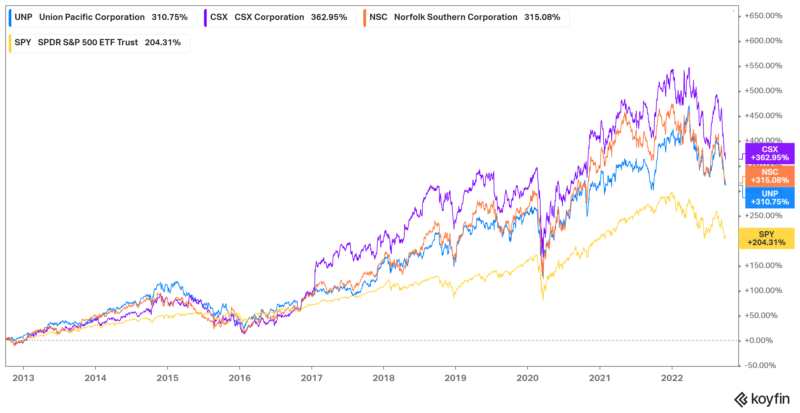 There are various factors to consider, of course:  starting valuations, broad stock market concentration in a few names or industries, economic backdrop, and much else, but fundamentally, I would argue that the single greatest contributing factor is the broad industry shift away from chasing elusive growth in freight volumes and instead focusing on extracting as much pricing and efficiency from captive business such as grains, automotive, and other sources that have no real options other than rail for long distance transport.

“[Y]ou might not choose rails over the other transportation sectors if you had a choice. Many of these businesses, and many of the things that move on rails are just captive volumes that can’t economically move via truck or via plane. When you think about these heavy grains, commodities, steel, things that require a substantial amount of movement and a substantial amount of capacity, and rails are the only option there.”

This lack of viable alternatives is represented in Union Pacific’s pricing power as represented by its revenue per car over time.  Since 2002, overall carloads on Union Pacific’s network have declined by a bit less than 1% per year, but Union Pacific’s revenues per car have increased 4% per year.  This is especially impressive given overall inflation over this period has averaged around 2% per year: 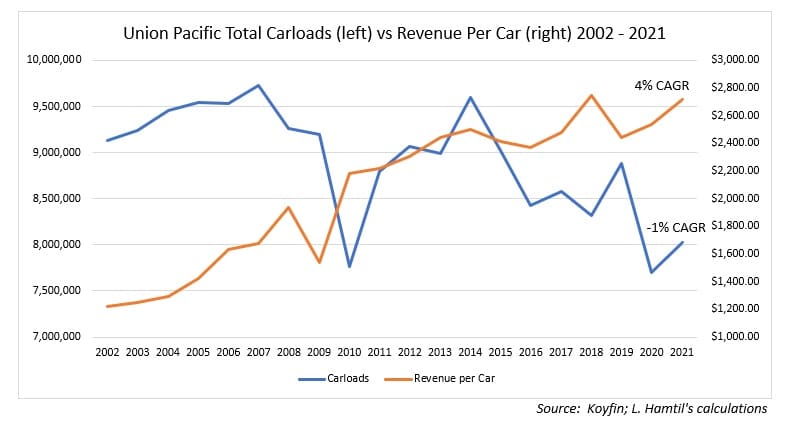 This pricing power, combined with a focus on precision scheduled railroading, or “PSR”, has led to tremendous efficiencies in operations with operating ratios seemingly reaching new all-time lows every year.  As Mr. Reustle noted in his podcast, with the adoption of PSR, railroad operating margins are broadly similar to Microsoft’s, which is quite an achievement for a 19th century industry.  To continue using Union Pacific as an example, PSR has helped the railroad become a cash machine, with conversion of EBITDA into free cash flow now greater than 50% versus the low teens two decades ago: 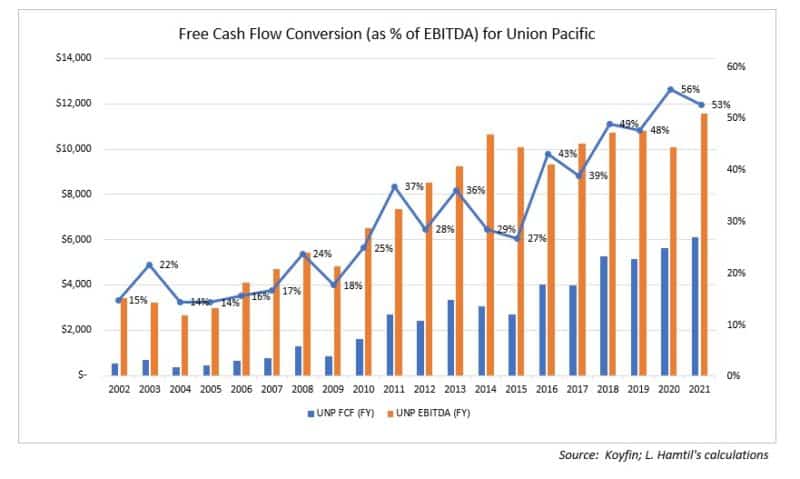 Of course all this cash has to go somewhere, and generally most of it has been returned to investors in the form of dividends and buybacks.  In fact, railroads have retired a number approaching one-third of shares outstanding over the last decade, and, as a result, free cash flow per share has grown enormously: 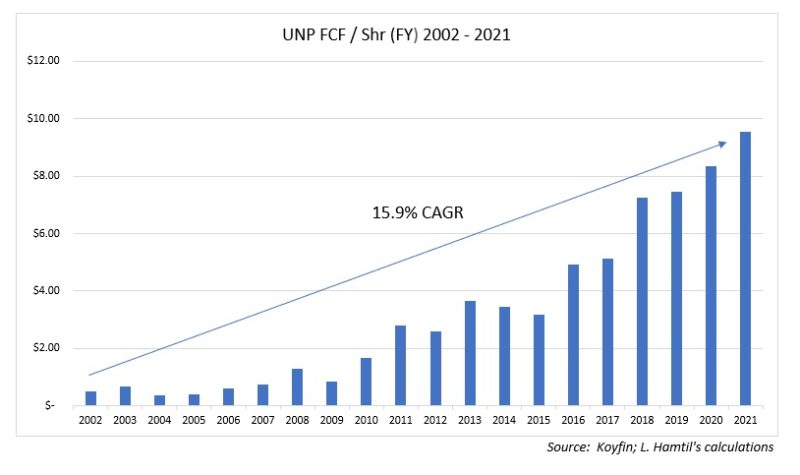 Not surprisingly, returns on invested capital have improved as well: 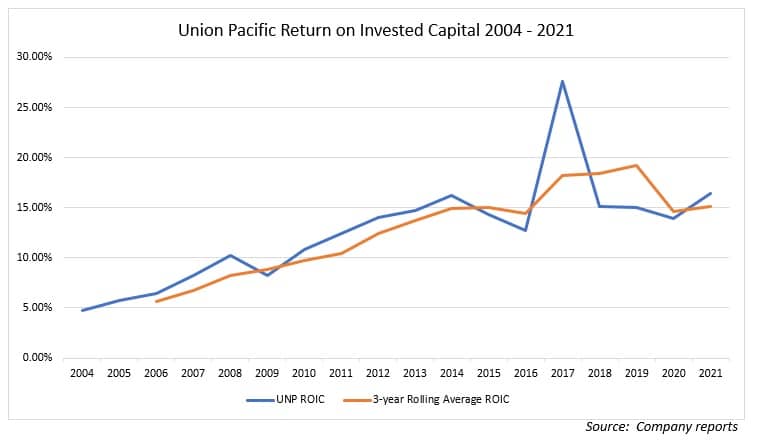 Of course, this is not to suggest that railroad performance will always be so stellar.  After all, there must be growth of some kind in order to sustain operations and keep revenues coming in.  There is only so much efficiency you can extract from what remains a heavily capital-intensive business.  Then there is always the specter of government regulation threatening to impose its heavy hand should profits be deemed anti-competitive.

Yet, for me, the broad lesson from the last decade-plus of following railroads is that while dynamic growth attracts the most attention, there is tremendous value to be found where growth opportunities are limited, and, as a result, focus shifts toward improving returns on invested capital, pricing power, and cash flow generation.

*Note:  Clients of Fortune Financial Advisors, LLC own shares of Union Pacific, CSX, and NSC.  I chose to use examples of performance specific to Union Pacific as it is the largest public industry operator, though performance metrics have improved similarly for most major players.