This post is also featured at The Personal Finance Engineer

In the first installment in this series, we discussed how, contrary to conventional wisdom, the most profitable industries historically have tended to be not the companies most closely associated with technological innovation, but rather those that are least subject to disruption.  In other words, industries such as tobacco and beer have tended have higher risk-adjusted returns than more glamorous industries such as software and financials.

In Mastery or Ignorance Part II, we elaborated on this theme, suggesting that it is the under-the-radar nature of these consumer staple-type industries that make them less prone to investor enthusiasm and resultant over-investment such as what happened in the utilities bubble of the 1920s, and the tech bubble of the 1990s when valuations in those sectors exploded well beyond anything fundamental.  In fact, when examining historical industry returns in a process we like to call “financial archaeology,” the recurring theme seems to be that investors have a tendency to overpay for innovation, while discounting stability.

To build on this theme, I asked a good friend of mine, the Personal Finance Engineer, Dan Sotiroff, to help me with the numbers.  We wanted to take the analysis a step further, and see just how stable the various industries have been over time, not just in terms of returns, but in terms of valuation multiples.  To do this, we examined three major valuation ratios for ten industry portfolios (the same 10 industries available from Ken French’s data library) were compiled with the help of Alpha Architect’s Jack Vogel.  We examined price-to-earnings, price-to-book, and EV/EBIT (enterprise value/earnings before interest and tax).   Here’s what we found:

As our previous posts have demonstrated, not only do Non-Durable (also known as consumer staples) industries have the highest risk-adjusted returns (e.g. higher Sharpe ratios), they have also posted some of the best absolute returns.  Conversely, the highly volatile technology and durable goods sectors are near the bottom when it comes to absolute returns.  At first blush this would appear to run counter to conventional wisdom:  that investors receive higher rates of return in compensation for bearing additional volatility/risk.  In practice, however, this has not been the case: 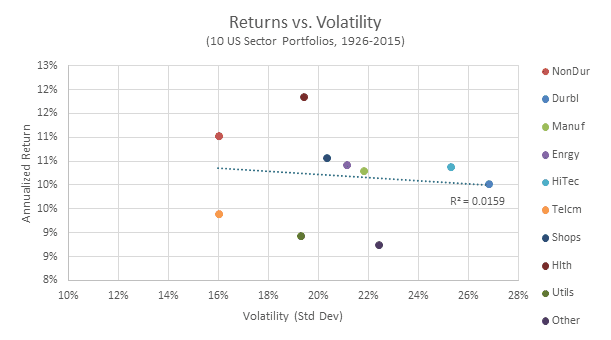 Since 1974, the non-relationship between greater volatility and higher returns has been even more stated: 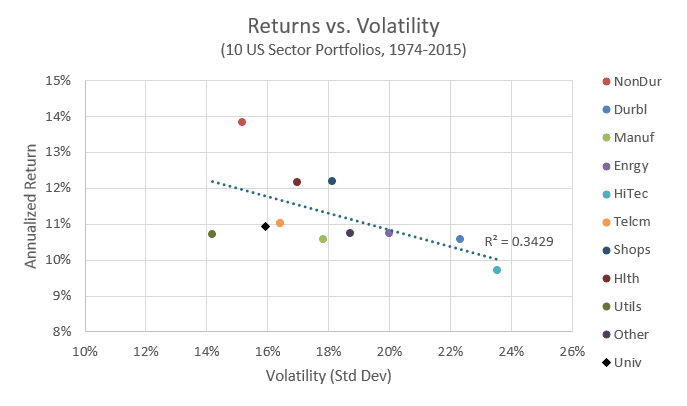 One of the astonishing things about so-called “defensive” sectors (consumer staples / non-durables, utilities, etc.) is that they have shown healthy historical returns, but they have done so while not commanding excessive multiples from investors.  In other words, there has been less volatility in the price-to-earnings and EV/EBIT multiples over time for consumer staples than for high-tech and telecommunications (Note:  In the French dataset, “Other” includes financials and banks, which explains that categorization’s plot placement.) 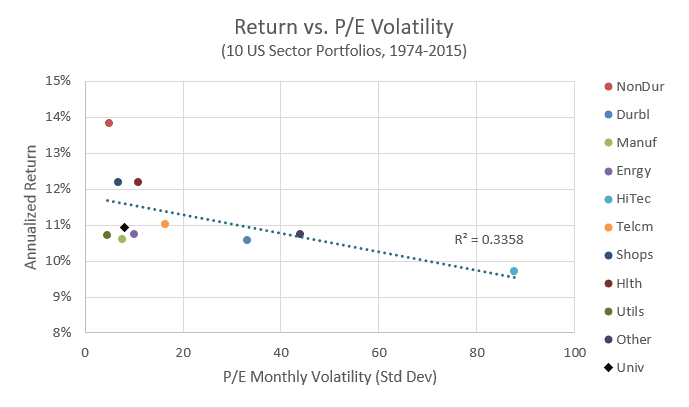 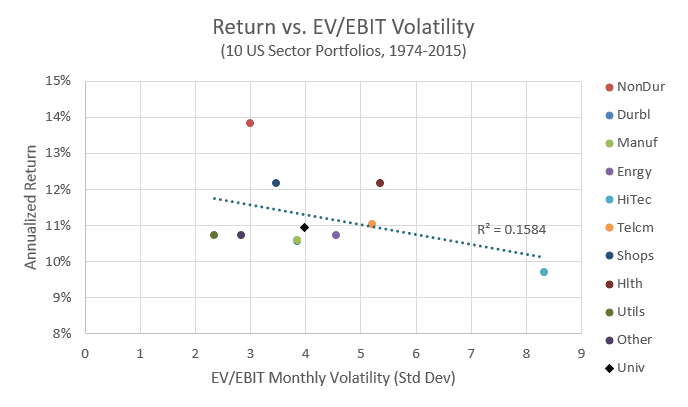 It is only on a price-to-book basis that consumer staples have shown a higher degree of volatility than other market participants: 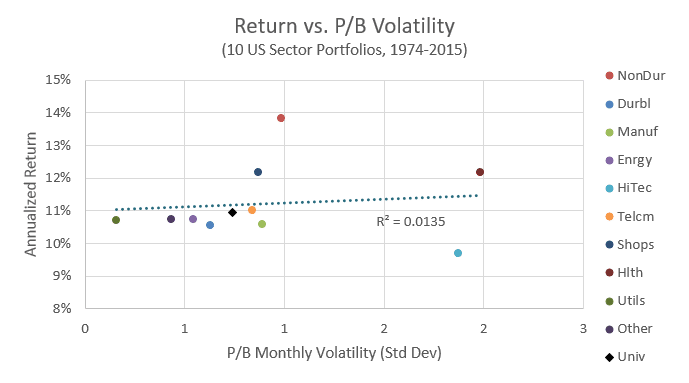 At this point we draw two conclusions. First, the volatility of returns, as well as price-to-earnings, enterprise value-to-EBIT, and price-to-book all have a shared input:  market capitalization. It’s worth noting, while not explicit, that enterprise value has an aspect of price “baked in” as the market capitalization of the company/sector/asset makes up a substantial portion of total enterprise value. The major implication here is that price movements have been responsible for a large portion (if not the majority) of volatility as the volatility of earnings, book value, and EBIT fail to alter the observable trends in a meaningful way (they are all flat to slightly negative).

Second, and perhaps more importantly, we note that simply taking on a higher level of absolute risk (as measured by standard deviation) is insufficient to generate additional return.  One of the fundamental ideas of the Capital Asset Pricing Model is that investors should only be compensated for bearing systematic risk—or risk that is highly correlated with the overall market and therefore can’t be diversified away.  Simply taking on higher levels of absolute risk shouldn’t pay off because uncorrelated but volatile returns can be diversified away. Along these lines of reasoning we should expect to see annualized returns correlate with beta, a measure of systematic risk. 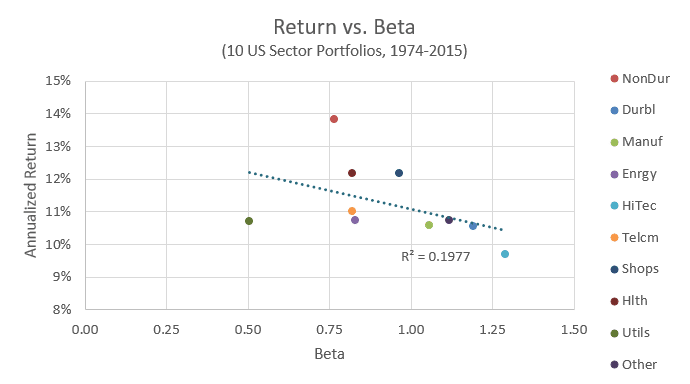 Finally, because of their a-cyclical nature, consumer staple stocks have seemingly been taken for granted.  Their returns have been largely consistent, but the stability of their valuations means they have been less prone to return-killing over-valuation.  Take, for example, a comparison of the most profitable industry of the last 100 years, tobacco, versus what many would likely assume would be the technology of the future, software.  Using the EV/EBIT multiple, you can see clearly the tech bubble of the late 1990s, while tobacco’s multiples have been remarkably stable: 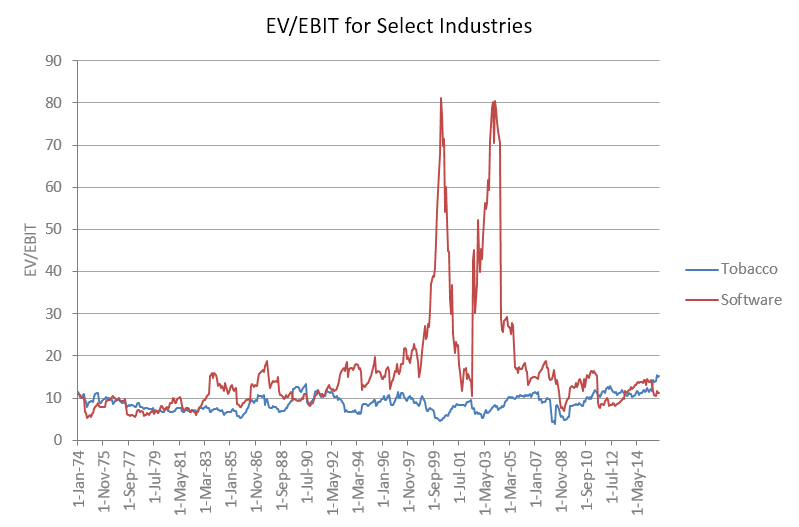 Similarly, you can see the same relative volatility in valuations of the hardware technology industry versus the soda industry: 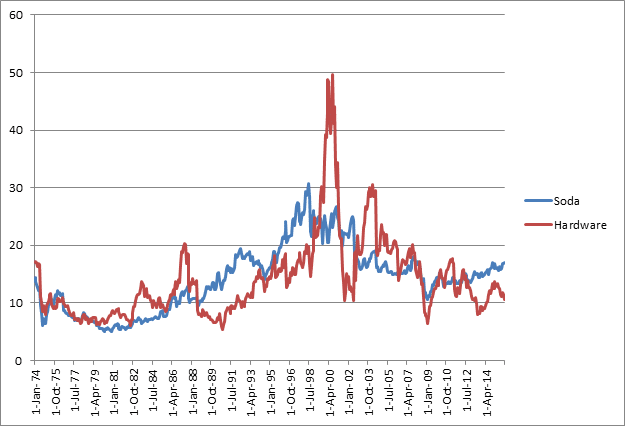 But despite the stability in its valuation multiple over time, tobacco has crushed software… 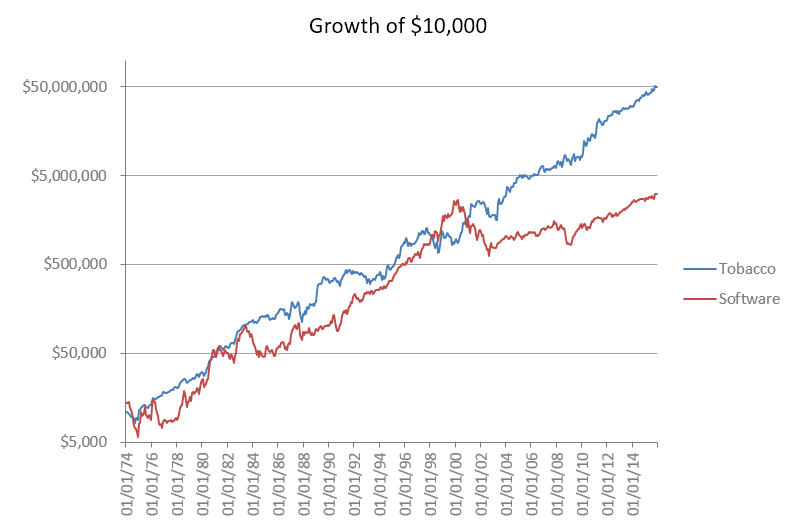 …and soda has outperformed hardware technology: 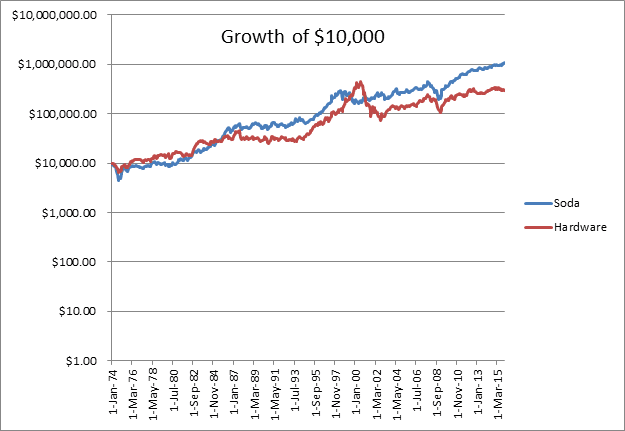 Despite the fact that additional forms of risk—the Fama French factors such as small cap and value–were not accounted for, we note that these trends run counter to expectations. We defer to famed value investor Howard Marks for a shrewd explanation of the relationship between risk and return:

Our data set shows a slight negative trend between return and Beta.  Frazzini and Pederson of AQR point out that many investors expose themselves to high Beta assets in an attempt to earn higher returns. [2] The result of tilting towards these high Beta assets results in lower risk adjusted returns compared to low-beta assets. Their analysis shows similar results in multiple markets including foreign equities, Treasuries, foreign bonds and commodities.  Thus the results observed here, while constrained in time and focused on domestic stocks*, are not a product of a specific period or market, but instead are somewhat consistent with outcomes present in multiple markets and stretches of time.

Perhaps the phenomenon we’ve described is best encapsulated by the commentary of Severian Asset’s Sam Lee.  Sam has written extensively on the historical outperformance of low-volatility stocks such as consumer staples, and he attributes their excess performance to three key factors:

1) Due to their tendency to over-extrapolate from current conditions, investors systematically fail to appreciate the earnings power of very stable companies, while overestimating the longevity of earnings for firms in highly cyclical businesses.

2) Investors have lottery-seeking tendencies which leads them to overpay for firms that have the potential for making enormous gains, while devaluing firms that earn low but steady returns.

3) Investors are leverage-constrained and so in order to earn higher returns seek out higher-risk assets, which, ironically, don’t produce higher returns.

In conclusion, it would appear that taking on higher levels of volatility or overpaying for innovation and glamour may make for great chatter at a dinner party, but don’t expect it to provide higher rates of return.

*While our study on volatility of valuations focused solely on domestic stocks, we found similar risk-reward characteristics for low-volatility sectors in both foreign and emerging market stocks, albeit without the luxury of having valuation data available (using the relevant MSCI sectors): 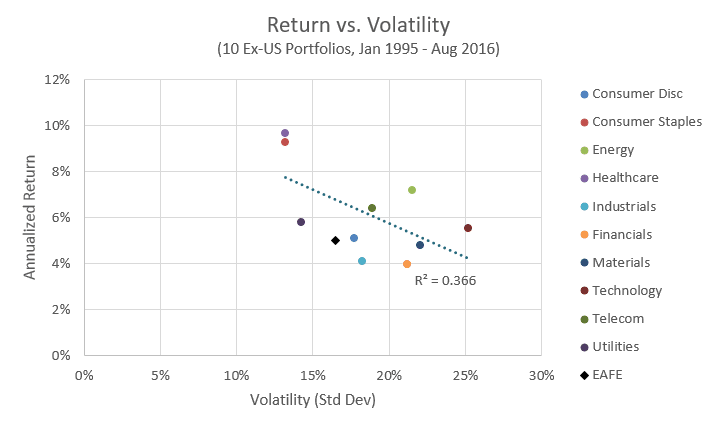 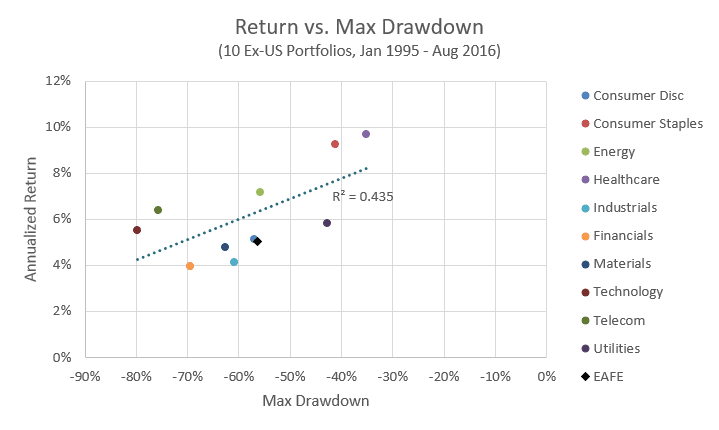 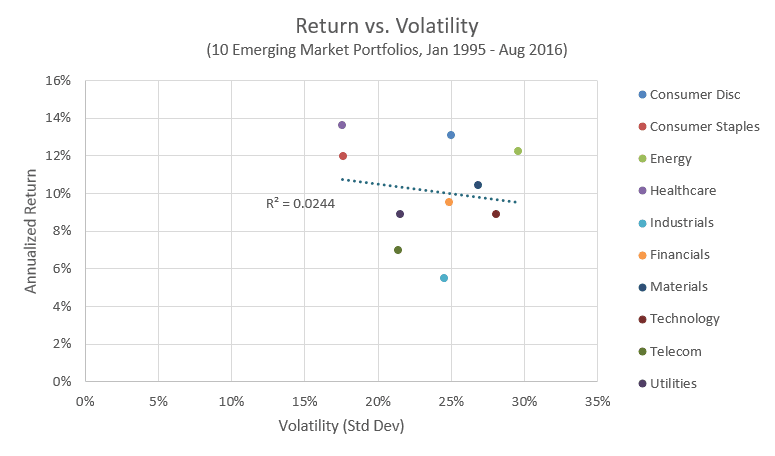 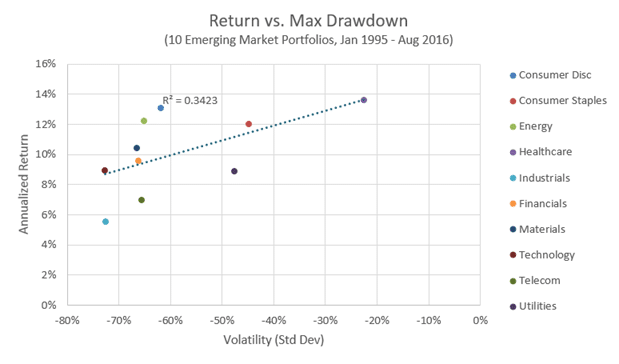 Disclosure:  Past performance is no guarantee of future results.  This writing is for informational purposes only and does not constitute an offer to sell, a solicitation to buy, or a recommendation regarding any securities transaction, or as an offer to provide advisory or other services by Fortune Financial Advisors, LLC in any jurisdiction in which such offer, solicitation, purchase or sale would be unlawful under the securities laws of such jurisdiction. The information contained in this writing should not be construed as financial or investment advice on any subject matter. Fortune Financial Advisors, LLC expressly disclaims all liability in respect to actions taken based on any or all of the information on this writing.