It is well-documented that starting valuations have been found to be highly predictive of subsequent returns, not just in the United States, but in many other equity markets around the world.  One of the more popular valuation metrics for evaluating prospective returns in a given market is the ‘cyclically-adjusted price-to-earnings’ ratio, or ‘CAPE,’ developed by Professor Robert Shiller of Yale University.  Essentially, Professor Shiller’s model adjusts earnings for inflation, and smooths out the noise in the earnings data by stretching it out over ten full years.

Given the utility of smoothing valuation data over a longer period to make asset allocation decisions, I asked a good friend of mine, Andrew Miller of Miller Financial (and frequent guest blogger for Alpha Architect) to help me crunch the numbers in an attempt to determine which global equity markets are best-suited for this type of metric.  Before getting into the results, it should be noted that the returns are in local currency terms, which we thought would eliminate some issues due to currency volatility.  Secondly, due to lack of accurate inflation data, we opted to leave the data series unadjusted for inflation, so we will hereafter refer to the valuation metric as “P/E 10,” instead of “CAPE 10,” which implies inflation adjusting.

So, where has P/E 10 been most predictive of future returns?  We analyzed thirteen countries, all of which are developed markets, and found that for some markets, like Hong Kong, P/E 10, has been less than useful: 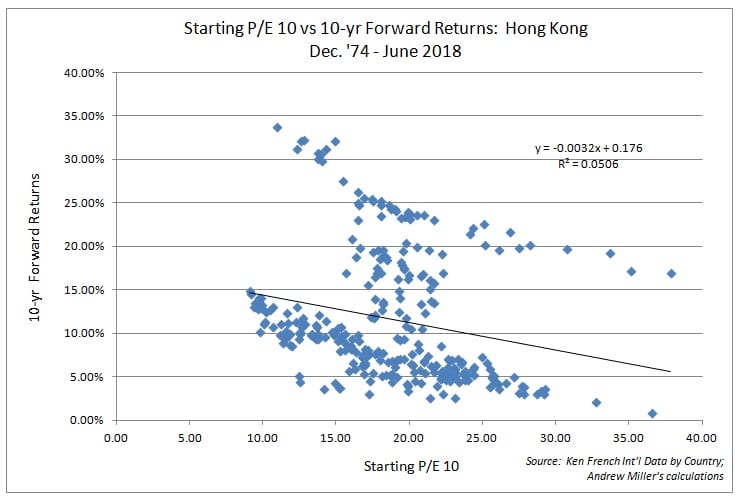 On the opposite end of the spectrum, P/E 10 has been particularly useful in markets like the United States: 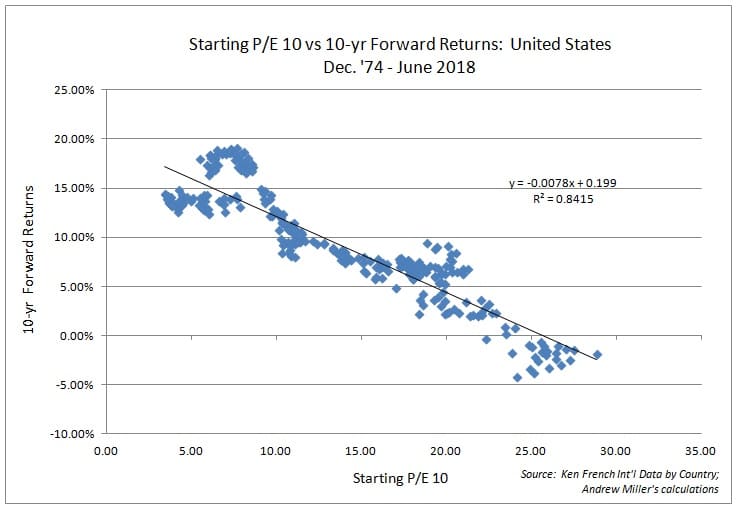 The full results for the thirteen markets analyzed ran the entire spectrum: 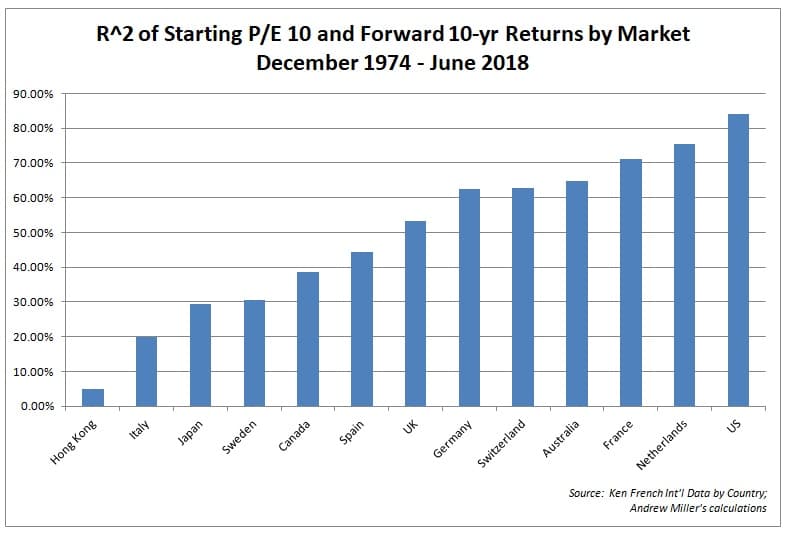 Since the effectiveness of P/E 10 seemed to increase gradually across the spectrum, we wondered what markets like Hong Kong and Italy had in common, as well what traits markets like the U.S. and the Netherlands shared.

We tested several different theories, among them the level of concentration in a market (as defined by a composite of the top holding’s weight in its parent MSCI index combined with both that same country index’s top sector weighting and also the weighting of the top ten holdings in the index).  The theory here was that perhaps the effectiveness of a long data series like P/E 10 would be most useful in markets where there was little dynamism, and the leadership of the market little changed from decade to decade.  However, these various trials resulted in no demonstrable relationship between market concentration and P/E 10’s explanatory power.

We did, however, notice that the markets that demonstrated low P/E 10 R^2 shared something in common which is that their equity markets, – again, as measured by their respective MSCI indices, – have heavy concentrations in domestic-only sectors, such as real estate and financials.  Conversely, markets such as the United States, France, and the Netherlands have tilts toward more global industries, such as industrials and information technology.

To test whether this might be factor, we created a composite to measure a given market’s domestic orientation.  This composite is essentially that country’s weighting in a combination of four sectors, – real estate, utilities, financials, and telecommunications.  When regressed against P/E 10’s explanatory power of forward returns, a relationship seems apparent:  the more domestically-concentrated a given market is, the less the explanatory power of its P/E 10: 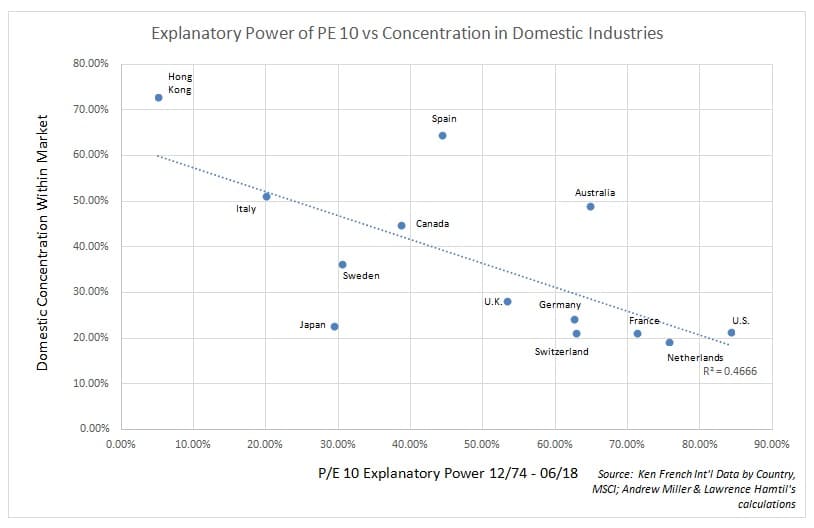 While this may seem to some like an exercise in data mining, the results may be somewhat intuitive:  if a given market’s earnings power is essentially domestic in nature, then factors within that market, – GDP growth, population growth, etc., – may be more useful, since they are more in sync with the future fortunes of domestic industry.  Markets like Switzerland and the U.S. however, are dominated by multinationals, and as a result they are less tied to the fortunes of the home market.  Said differently, a prolonged recession in a market like Italy should matter more to future returns than starting valuation; no matter how cheap the stocks are, if the local economy is weak, there will likely be no rebound.  On the other hand, a multinational-dominated market like Switzerland’s can withstand a weak local economy as its major components are selling to all corners of the globe, so valuation should matter more in cases like that.

It is not a perfect explanation, of course, for the varied explanatory power of P/E 10, and it is true that some generous assumptions had to be made to complete the investigation.  However, there is a logic to the results, and enough evidence to suggest that global investing based on valuation differentials alone is perhaps quite a bit more complex than is commonly supposed.