High energy prices around the world this past year have added impetus to the desired energy transition away from fossil fuels to electricity, and lithium, the critical element in power storage, is front and center.  Demand for lithium, which is currently around 500,000 tons globally, is forecast to grow to 2-3 million tons annually over the next decade as demand for battery-powered electric vehicles (BEVs) is expected surge [graphic via Morningstar]: 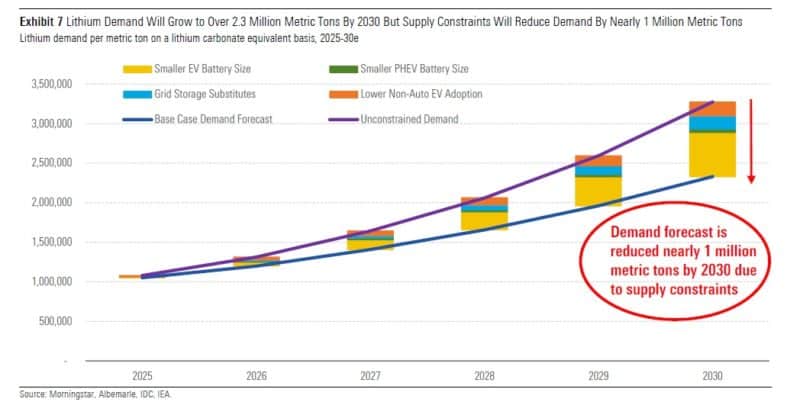 To help us understand better the lithium industry and the vast implications for the wider energy transition I asked my friend Seth Goldstein, who covers the lithium industry for Morningstar, to break down several critical subjects in this discussion.  Our Q&A follows below:

LH:  I’ve heard it argued that lithium is a specialty chemical rather than a commodity, and I believe your firm, Morningstar, classifies it as such. Why is that the case?  How is it different from other commodities primarily associated with energy?

SG:  Lithium does not fit neatly into either a commodity or a specialty chemical. Lithium prices move up or down based on supply and demand economics, which is similar to other commodities. We also view the economic moats of lithium producers as largely being determined by their position on the cost curve. We view low-cost lithium producers as having an economic moat based on their cost advantage. This is in line with our framework for commodity producers.

However, product differentiation is a key criterion we use to determine if something is a specialty chemical. For battery quality lithium, which is the majority of demand, the product is specialized based on the customer’s (battery producers) requirements. Currently, each battery producer sets different requirements for the maximum impurity levels allowed in the product. As a result, a lithium producer is typically unable to sell the exact same product to different customers. For example, the lithium producer Albemarle may sell lithium hydroxide to both Panasonic and LG Chem to be used in batteries, but the product sold to Panasonic may not meet LG Chem’s requirements and vice versa. The reason for this is that the impurity profile of lithium affects a battery life. Given this product differentiation, we classify lithium producers as specialty chemicals producers.

LH:  How is the lithium industry organized? Is it similar to oil & gas with upstream [explorers & drillers], midstream [transportation & storage], and downstream [refiners, retailers] operators? Are there integrated firms, specialized firms, or a mixture of both?

SG:  Lithium is generally organized into upstream producers, who exact the resource from the ground and downstream converters, who process the lithium into chemicals to be sold for their end market use (batteries, ceramics, etc.). The level of integration between the two parts generally depends on resource type. When starting from brine-based resources, typically found in South America, lithium producers are fully integrated, meaning the company extracts and then processes the lithium.

For hard-rock based resources, typically found in Australia, the upstream producers will extract ore from the ground and do some minimal processing to make a lithium concentrated product that is called spodumene. The spodumene is then sold to downstream converters, the majority of which are in China, who process the spodumene into lithium chemicals. In hard rock, the large firms, such as Albemarle and Tianqi are fully integrated, but there is less vertical integration for many of the other lithium resources, and they are operated by pure-play upstream companies. This is a similar dynamic to iron ore and steel, where iron ore producers in extract the resource in Australia and then sell it to Chinese steelmakers.

LH:  What is the breakdown of private vs state-owned lithium producers? Is there a material difference in the quality of operations between the two as can be argued with oil & gas?

SG:  In general, the majority of lithium is produced by private companies. Even the two large Chinese firms, Ganfeng and Tianqi, are privately owned. It’s also important to distinguish between the upstream resource and the downstream conversion when looking at private versus state-owned lithium production. The vast majority of upstream resources are privately owned, with very little government ownership.

While the majority of downstream resources are also privately owned, there is a larger amount of Chinese state-owned enterprises who buy spodumene and process the spodumene into lithium chemicals. However, even in China, four of the largest private lithium companies (Albemarle, Livent, Ganfeng, and Tianqi) are some of the largest producers in the country.

LH:  What are some of the future tangential opportunities in lithium that are still relatively nascent? Recycling, for one, comes to mind.

SG:  Recycling is a new long-term opportunity in lithium and other battery materials. However, it’s important to remember that an EV battery typically lasts 8 to 10 years, so even if 100% of batteries were recycled this secondary supply would still make up a small portion of total demand for at least the next decade. Global EV adoption just crossed 5% last year, so this limits the number of batteries available for recycling in 2030.

I view new lithium extraction technologies, which are known as “direct lithium extraction” or “DLE” as a larger opportunity. This essentially works by filtering brine to extract lithium, which would allow more lower quality resources to enter production. Lithium is one of the most abundant resources in the world, with lithium even being present in all saltwater in the ocean. However, the vast majority of lithium is in too small of concentrations and is not economically viable to produce. DLE technology can reduce this concentration threshold and make more resources economically viable.

Finally, I would point to clay-based resources as a new opportunity in lithium. Currently, all lithium comes from either brine or hard rock resources. Clay-based projects have significantly higher upfront capital expenditures. Combined with lower historical lithium prices, clay-based resources have not previously been economical to pursue. However, with long-term prices rising, clay projects now have a positive net present value. For example, Lithium Americas’ Thacker Pass project, which is the largest known U.S. lithium resource, currently makes economic sense to develop for production. 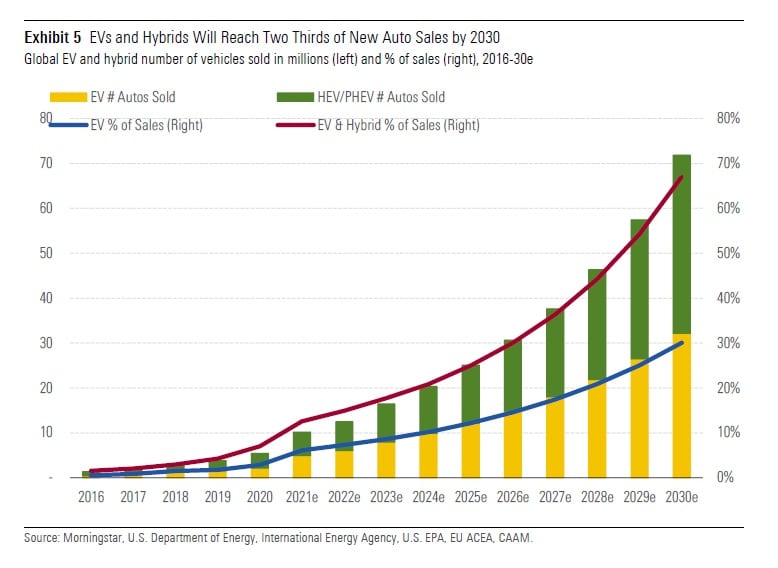 LH:  Given the carbon-intensive nature of lithium extraction and refining, etc, is there a case to be made that traditional energy sources still have a role to play in an energy future dominated by lithium?

SG:  To clarify, carbon-intensive lithium extraction comes from hard rock-based resources, which use traditional open pit mining. Brine-based resources, particularly in Chile, have relatively lower carbon intensity as the brine is pumped into ponds, where it sits for 18 months and the sun evaporates the water, accounting for 70% of the total energy required in processing.

When we think about the energy transition in general, we still see traditional energy sources such as oil and gas playing a crucial role in our economy. It’s important to remember that oil demand is affected by the stock of vehicles, the vast majority of which are still internal combustion engines. While we forecast EV adoption will grow each year, this is a flow number that has a lower relative impact on the total stock. For example, the average auto life is 15 years. If 100% of vehicles sold next year were EVs (flow), it would take 15 years for the auto fleet (stock) to fully transition to EVs.

Looking at other parts of the transportation sector, Tesla just released its semi-truck, but heavy charging infrastructure will need to be built to support long-range trucking, making the transition likely to occur more gradually. Also, EV technology does not currently work for some modes of transportation, such as ships and airplanes due to the lower range relative to what internal combustion engines provide. As a result, we could see oil demand for these vehicles grow, partially offsetting the decline from the transition to EVs.