It has long been observed that so-called “sin stocks,” – those associated with socially undesirable habits such as smoking, arms manufacture, or gambling, for example, – have outperformed both more socially acceptable industries and the broader market.  In fact, since August of 2002, the USA Mutual Vice Fund, which will serve as our proxy for “sin stocks,” has bested its socially-conscious counterpart, Vanguard’s FTSE Social Index, by .67% annualized through January.  It has also managed to best the S&P 500, albeit by the much slimmer margin of .06% annually: 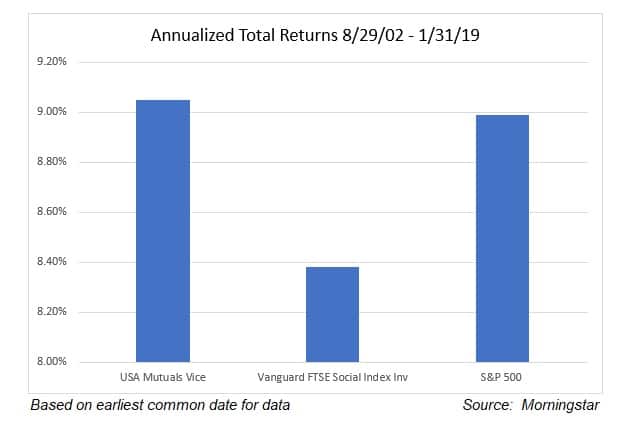 Known as the “sin premium,” the excess returns that sin stocks have historically generated have been explained by Cliff Asness here, as well as by Elroy Dimson here, who argue that if investors in general shun given pockets of the market, the prices of stocks in those markets will be depressed, thus offering higher than average returns to those who are willing to own them.

However, while this is a compelling explanation for the historical outperformance of sin stocks in general, it is not enough to explain why the sin premium is higher in some “sin” industries than others, and nonexistent in the casinos and gaming space: 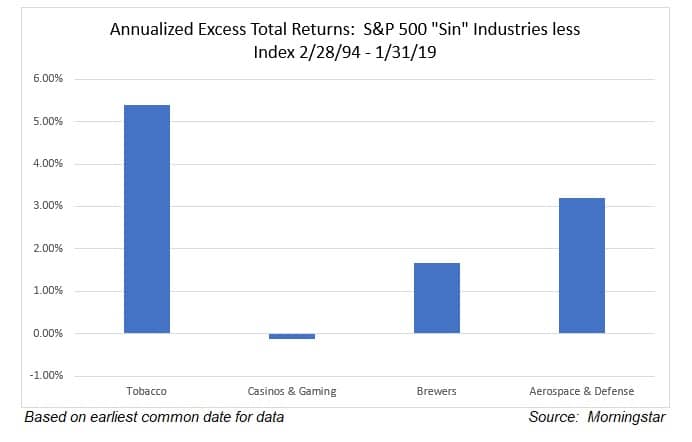 Thankfully, David Blitz and Frank Fabozzi of Robeco have performed an in-depth study of sin industries, and have found that the sin premium can be explained best by significant exposures to the “low-beta, profitability, and investment factors.”  In other words, sin stocks that are both high quality (high profitability and clean balance sheets), and low volatility have performed best.

This insight seems to be the key as to why companies in the tobacco and arms industries have done well, while those in the casino and gaming space have not.  A  simple regression using a proxy for the industry, VanEck’s Gaming ETF (symbol BJK) over the period 1/31/08 (roughly when BJK was launched) through 1/31/19 using the AQR “Three Factor Model” via Portfolio Visualizer shows a significant negative loading to both the “quality minus junk” or “QMJ” factor, and a negative loading to the “low beta” factor:

This compares unfavorably, for example, to a proxy for the arms industry, iShares’ US Aerospace & Defense ETF (symbol ITA), which, over the same period, loads positively on those same factors:

There are, of course, additional explanations for why certain sin industries have done well.  Tobacco stocks and defense stocks operate in more or less oligopolistic markets with extremely high barriers to entry, not least of which are government regulations and policies, which insulate incumbents against new players.  In contrast, casino and gaming stocks are highly cyclical and they typically have a higher leverage.  This leaves them vulnerable to economic downturns from which they are less quick to recover than other sin industries: 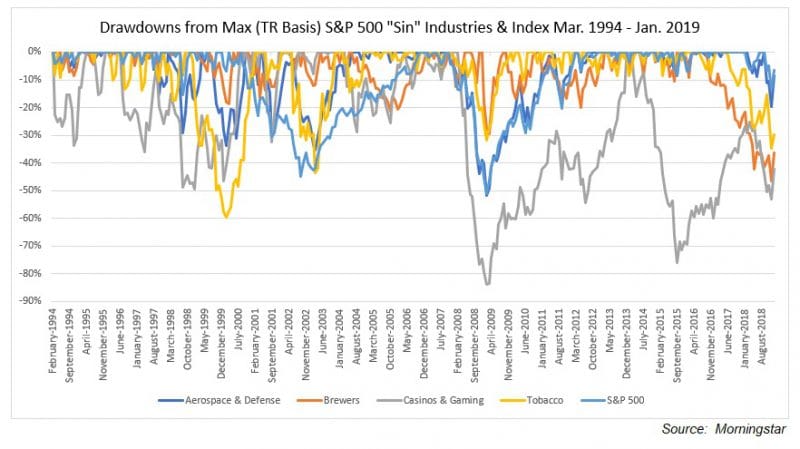