The lucrative businesses of the major cell phone tower operators such as American Tower, Crown Castle, and SBA Communications are no secret to investors; over the last twenty years, the shares of all three companies have handily outperformed the S&P 500 index, with each compounding at greater than 10% per year: 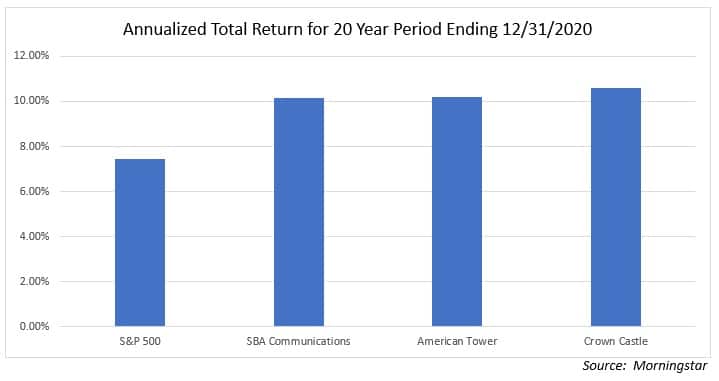 Given intense investor interest in the space, I invited Matthew Dolgin, who covers the cell tower operators for Morningstar, to share his views regarding what makes these attractive businesses, future growth opportunities for the space, and much else.  Our interview is below:

There is a lot to like about the cell phone tower business:  high barriers to entry; strong recurring cash flows; a strong tenant base.  These are all well-known positives and widely discussed.  What do you think are some downsides to the business model?

There’s really little to dislike about the tower business model, which is why any hesitation I have about the stocks at any given point in time is typically based on valuation rather than concerns about the businesses of the pure tower companies. Despite how good the model is, there’s more of a ceiling to the level of sales growth they can produce, so even more so than some other companies, it’s hard to justify paying higher and higher multiples.

The limitations to growth are the limited pool of potential customers (primarily mobile phone carriers) and the finite space that the tower providers can lease. Few organizations have substantial need for tower space, and for those that do, there is only so much physical space on a tower in which to put equipment. It’s difficult to envision any of the providers falling below low-to-mid-single-digit annual sales growth on their towers in the foreseeable future, but it’s likewise difficult to envision organic (same-tower) sales growth ever achieving double digits.

The customer concentration is another potential pressure point. Carrier consolidation has certainly been a threat traditionally, and the concentration also gives carriers power. The tower industry has thrived with roughly 3% annual rent escalators on U.S. towers (escalators are often tied to inflation internationally). Switching costs and the historical decision by carriers to use third-party tower providers prevents realistic concern that they would leave towers, but the concentration also limits tower pricing power. If tower companies wanted to be much more aggressive with pricing, the carriers could come up with alternative options.

What is your view of future growth prospects for the industry internationally?  I understand from your work that emerging economies in Asia and Latin America, for example, represent great growth opportunities given the rise in the middle class there, and attendant demand for smart phones and mobile data, etc. 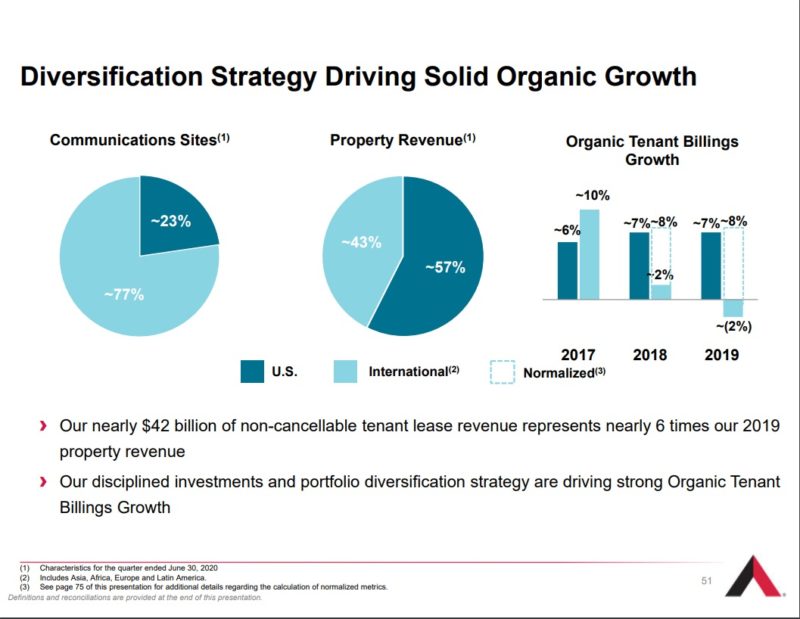 Three main reasons underlie my international bullishness: lack of 4G saturation in many markets; use of mobile devices as primary broadband connections; and very high populations. Regarding 4G, emerging markets tend to be years behind the U.S., which has had ubiquitous 4G for about a decade. 4G brought a lot more data use and much higher need for bandwidth, which translates to more spectrum needed and therefore more equipment going on towers. As each of the countries in Africa and all parts of India get up to 4G, there will need to be more tower spending. Further enhancing data use is that in many of these countries, there is not broad coverage of wireline connections, meaning all internet usage will rely on those tower connections, unlike in the U.S. Finally, the sheer number of people in places like India is just a further tailwind to potential data usage and therefore need for wireless spectrum and tower deployment.

With all that said, India has been a huge anchor on American Tower the last few years due to major carrier consolidation. They have been slowly getting past that, and I still believe they will be well-served in that market long term.

Finally, I like the geographic diversification the international presence brings. The U.S. has been a great market the last few years, but it is also a mature market that tends to ebb and flow. If and when we get more into an ebb, the international exposure should allow American Tower to outperform.

I have heard it argued that self-driving cars are another important growth opportunity for cell tower operators.  How do you view this?

Self-driving cars are just a huge unknown, but I am not expecting them to ever be major catalysts to tower growth, and I’m certainly not forecasting it in the near term.

There are several things we don’t know: How much wireless spectrum do they need? How much will they rely on sensors that are independent of towers? Who will be the customer on towers? The car manufacturers? Will they be part of carrier plans?

While we don’t know the answers, we do know that things like sensors really don’t require much bandwidth, and current deployments have been negligible. While some tower presence may be critical, it doesn’t seem to me that autonomous vehicles will be a major source of traffic…data traffic that is; please excuse the pun. If it’s not causing a lot of data traffic, it’s not going to lead to a major growth driver for tower companies.

More broadly, I think you can look at many IoT uses through the same lens, and maybe in ten years we’ll see it differently, but we’re not expecting it to cause any major movement on towers in the near to intermediate term.

What do you think are the greatest potential disruptors of the cell tower business?

Apart from the threat of consolidation, which no longer really exists in the U.S., small cells has long been on our radar, but we really don’t think they will ever cannibalize the need for towers.

With small cells, a firm deploys spectrum on structures like light poles within cities rather than on the big macro towers. Ultimately, however, deploying spectrum on small cells is really expensive because of the very limited distance signals can cover from them, not to mention the inferior signal one might get from them due to the nature of the spectrum that is typically deployed on them (mid-to-high band).

Small cells will be integral to the fastest 5G signals, but a) we see them as complementary to macro towers rather than a replacement, and b) we see them as being widely used much more so in densely-populated cities rather than rural and more ex-urban areas. (With dense populations, the cost for coverage of such small distance can be worthwhile, whereas that’s not the case in sparsely populated areas).

With small cells not being a huge concern as a tower disruptor, I guess my biggest concern is therefore the unknown. Technology moves really fast and seems to always be able to do things that were previously inconceivable. Years down the line, it would not surprise me if more narrow bands of spectrum could accommodate more bandwidth and propagate farther, and with that, the use for an extensive presence on towers could be reduced. Innovations like dynamic spectrum sharing, carrier aggregation, and massive MIMO are things we’ve analyzed recently that allow carriers to more efficiently use spectrum (and therefore deploy less equipment on towers). Our view with those technologies now is that they simply counter some of the further tower deployments that are happening and will not disrupt the industry, but I’m sure there will be yet another technology coming soon. Fast-moving technology is a main reason why we put narrow, rather than wide, moats on tower businesses. I can’t even try to predict what will be technologically possible in twenty years.

How do you view Crown Castle’s decision to invest heavily in small cells, especially given the potential competition from AT&T and Verizon?

Crown Castle’s small cell strategy is the reason we favor its peers. Towers, which we think are fantastic, account for 70% of Crown Castle’s revenue and about one quarter of its capital spending, and the segment generates 65% operating margins. The company’s remaining revenue comes from its fiber segment, which includes small cells. Fiber accounts for over 70% of capital spending and has operating margins around 55%.

Ultimately, our view is that it is really expensive to build out fiber, and we are very skeptical the company will ever generate a worthy return on the massive spending it has been doing. You mentioned the primary reason. Crown Castle has acknowledged that having only a single tenant on a fiber run does not produce returns that justify the costs. To Crown Castle, the attraction of small cells is the ability to colocate multiple tenants on the fiber. But unlike towers, where each carrier is meeting its tower needs exclusively with third-party tower providers, two of the three major U.S. carriers can meet at least some of their need internally, and they have expressed a desire to do so. What’s more, there are many fiber owners out there. Unlike towers, where the tower itself is the scarce resource, with small cells, the fiber is the scarce resource. If you have fiber, anyone can pursue the permits to put up a small cell on the nearest street pole. With AT&T and Verizon willing to pursue fiber alternatives besides Crown Castle, we don’t think Crown will garner sufficient colocation.

To be sure, AT&T and Verizon will use Crown Castle’s small cells to a certain extent, as no single firm blankets enough of the landscape with fiber to meet all of a carrier’s small cell needs. Nonetheless, there is much more competition in small cells than in fiber, and we don’t think Crown will gain enough scale to make the business economically profitable.

Do you think the REIT structure makes sense for these businesses?

With the cash they generate and the tax benefits the REIT structure brings, it makes a lot of sense. The REIT structure may contribute to the firms being more highly levered with debt than companies in many other industries–as they often use debt to fund expansion–but with the steady, contractually guaranteed cash flows from financially stable customers, we don’t see that as a problem.

None of the firms is forced to pay especially high dividends, and SBA’s strategy is actually to return cash to shareholders well in excess of what it’s required to pay in distributions, which it does through its aggressive share repurchase strategy. That’s a whole separate issue for SBA, as it takes on more debt to fund the buyback, but the bottom line is that the REIT structure doesn’t put the firms in a cash crunch and doesn’t affect the businesses they’d be in anyway, so it seems to be a smart strategy to lower their tax burdens.

How can readers get in touch with you and your research?

Readers can sign up for a subscription to our analysis at www.morningstar.com/products/research.

Clients of Fortune Financial Advisors, LLC, own shares of AMT, SBAC, and CCI.