Indexing advocates like to point to the historical skewness of stock returns as evidence that indexing by market valuation is the surest way to capture what rewards the stock market offers.  The logic of this popular argument seems sound:  history shows that only a handful of stocks are responsible for the market’s aggregated gains over its history, and attempts by active management to beat the market are usually done so with concentrated portfolios, which inevitably underperform because active managers fail to identify, let alone capture, those few stocks that generate outsized gains.

However, as we have explained before, this logic is faulty, as portfolios based on market capitalization simply overweight yesterday’s winners, and reduce exposure to the smaller components that may offer more promising rewards going forward.  S&P’s research team explored this dynamic in their excellent paper, “Outperformance in Equal-Weight Indices.”  The authors demonstrate that by virtue of its periodic rebalancing, – which results in an equal spreading of bets across the index’s components, – the equal-weighted version of the S&P 500 has offered investors more exposure to extreme winners over time than the capitalization-weighted index (via S&P Dow Jones): 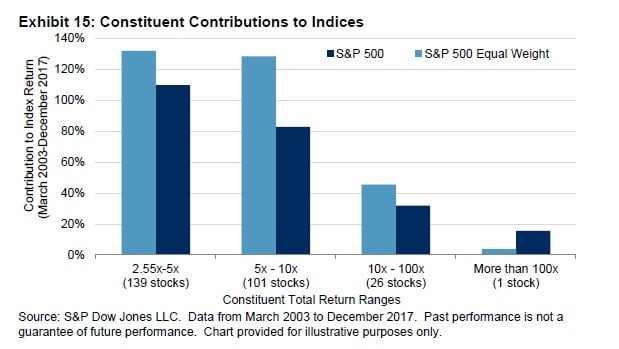 To emphasize this concept, here are a few interesting statistics regarding the composition and component performance history of the S&P over the last few decades:

This last bit is important, as the weighting of the top ten components of the S&P 500 has averaged roughly 20% since 1980: 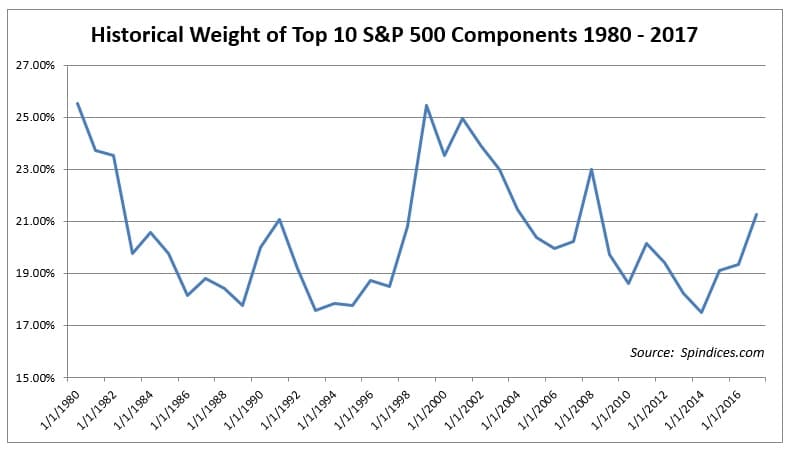 In essence, even though capitalization-weighted indexing in the U.S. has exhibited more dynamism than in many other markets around the world, the reality is that this form of indexing is consistently placing bets on a largely unchanged group of stocks.  Equal-weighting avoids this concentrated bet making, which, combined with an inherent tilt to size and value, make it an effective and superior strategy in most instances.