After having fallen precipitously from its all-time high set in 2011, the price of gold has surged about 15% so far this year, a performance that has even surpassed the S&P 500’s year-to-date gain.  Not surprisingly, along with the renewed strength in gold, there is renewed interest in owning it.  Yet despite all the blog posts and articles written on the subject of gold over the past decade and a half, it seems that few people understand exactly why gold behaves as it does.  In this post, I hope to shed some light on the matter in order for investors to have a better understanding of the risk and rewards involved with allocating significant capital to the precious metal.

First of all, even though I have just broken this rule, it is generally unwise to compare gold to stocks.  Instead, it is best to think of gold as a kind of finite currency, as Mother Earth plays the part of the central bank in controlling its supply.  Unlike other commodities such as oil or copper that are mostly consumed, gold has very few industrial uses, and so the supply remains fairly steady over time.  In 1971, President Nixon ended the convertibility of dollars into gold, thus making the dollar a fiat currency.  Gold’s fixed value was allowed to float, and it essentially became not an anchor but a competitor to the dollar.  The two “currencies,” if you will, have enjoyed a negative correlation ever since: 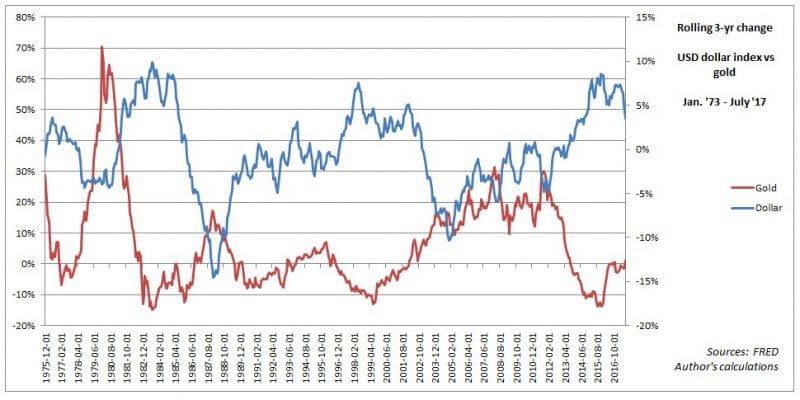 Since January of 1973 (the series begin here as that is the earliest the Fed’s dollar data go back), gold has appreciated against the dollar at around a 6.9% annualized rate.  Similarly, other competing currencies such as the Swiss franc and Japanese yen have also appreciated against the dollar, though at the much more muted paces of 3.07% and 2.29%, respectively.  The reason for gold’s greater performance is that it is not controlled by any central bank that might be concerned with its currency appreciating too rapidly, and thus takes actions to limit its appreciation.

In this context, for investors, gold makes sense as an effective hedge against cyclical dollar weakness.  Because it is not, however, a very good hedge against inflation, – which is the main reason investors hold long-term assets, – investors should be careful not to mistake gold’s value as a hedge for long-term investment potential.

For long-term investors concerned with protecting their portfolio’s purchasing power as well as fending off periodic bouts of dollar weakness, the better investment is likely foreign stocks.  The reason is for this is that while both gold and foreign stocks do better than U.S. stocks when the dollar is weak… 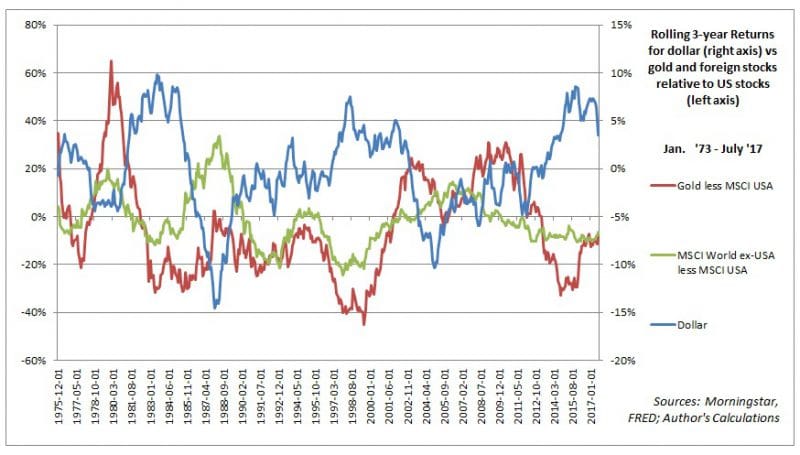 …foreign stocks, like equities in general, have greater long-term inflation-beating potential as they offer participation in the fortunes of the global economy and the profits it generates.  This is amply demonstrated by the MSCI World ex-USA generating 9% annualized returns over the same time period that gold earned just 6.9%.  What is more, foreign stocks also generated those returns on a much more consistent basis, with negative outcomes only 20% of the time over an almost 45-year period.  This stands in stark contrast to gold, which suffered negative outcomes 43% of the time: 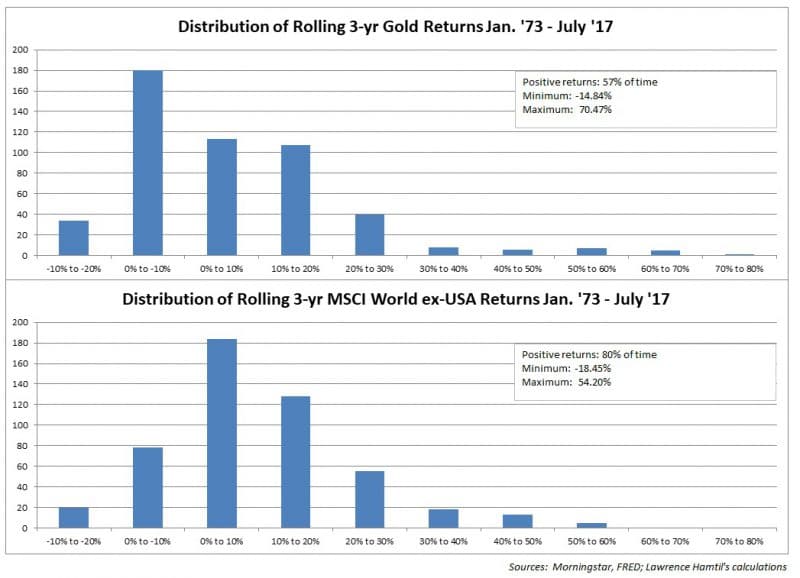 In sum, gold should be considered at best for only a portion of an investor’s long-term portfolio, perhaps alongside other currencies, which would make sense for those who have obligations denominated in competing currencies.  For long-term investors, however, there are better means of generating superior long-term returns while hedging against dollar weakness at the same time.