Scott Krisiloff of Avondale Asset Management is a very insightful asset manager and financial commentator.  The “Company Notes Digest” that is available on his company’s site is extremely informative, and it’s also very useful for anyone looking to get a sense for how corporate officers view the real economy.  That being said, something Scott tweeted out the other day caught my attention:

I talked with Scott about his comments, and he expanded on them at length.  While I think there is a lot to his argument that many of the policies enacted by both the federal government and the Federal Reserve in the wake of the financial crisis have been counter-productive, I wanted to take the time to offer my thoughts on the matter.  Putting aside a definition for “Zombie economy,” I wanted to examine whether there’s anything to the charge of “zero cost of capital” being a culprit in banks, energy, retail, etc.

Regarding banks, Scott offered his opinion that the Fed’s interest rate policy has kept unhealthy banks in business.  In simplest terms, what ZIRP was was the Fed’s effort to keep the federal funds rate (the rate at which financial institutions lend to one another) at or near zero (the Fed raised rates off this level in December of last year).  The theory behind this is that financial firms exposed to a liquidity squeeze would find the stress alleviated by lower borrowing costs.  This would then lead to such things as a return to healthy lending and cash circulation throughout the economy, and a resurgence of inflation to healthier levels, among other things.

While ZIRP’s effectiveness in achieving those lofty goals is debatable (I have my own doubts about it), it’s not clear that ZIRP has kept unhealthy financial institutions afloat.  As Bill McBride’s CalculatedRISK blog pointed out in January, a typical year sees about seven bank failures a year, but since the implementation of ZIRP in December of 2008, many hundreds of banks have failed (graphic from Bill McBride): 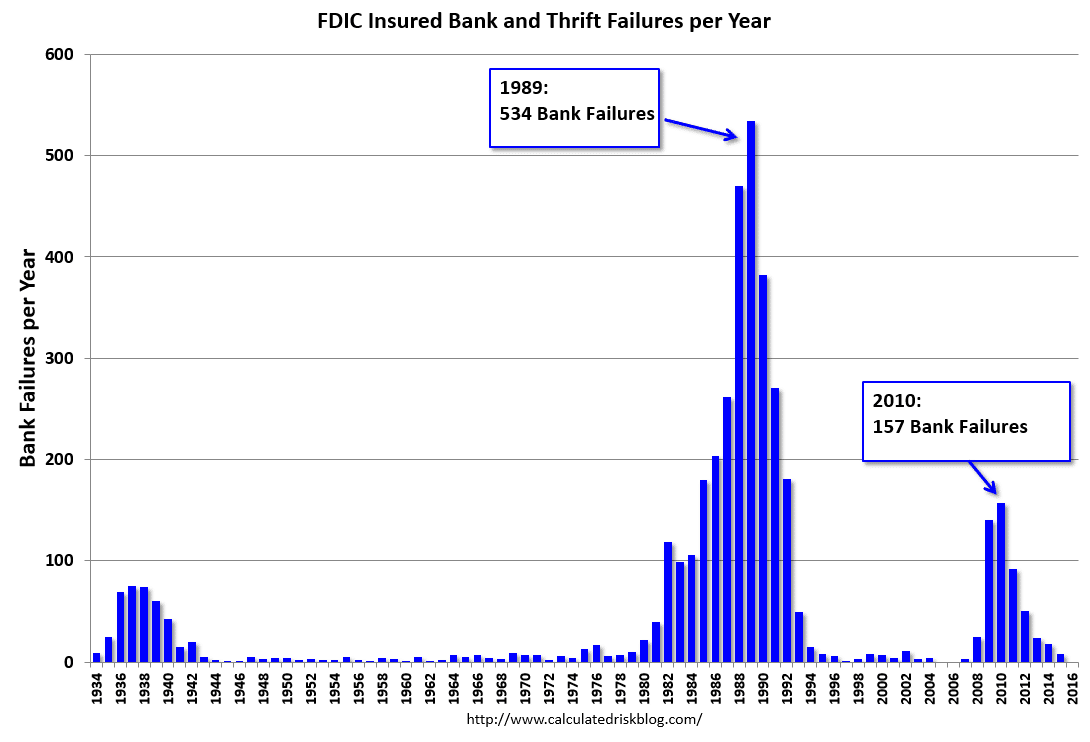 While correlation does not amount to causation, it seems safe to assume that since bank failures have been higher than average despite ZIRP, then it’s wrong to assert that ZIRP has kept unhealthy banks alive.

Furthermore, the argument that ZIRP has allowed sick banks to fatten their profits enabling them to borrow from depositors at no cost and lend long at +300-400 basis points seems similarly misguided.  In fact, the opposite is true; there is little, if any, relationship between the federal funds rate targeted by Fed policy, and net interest margin for bank lending: 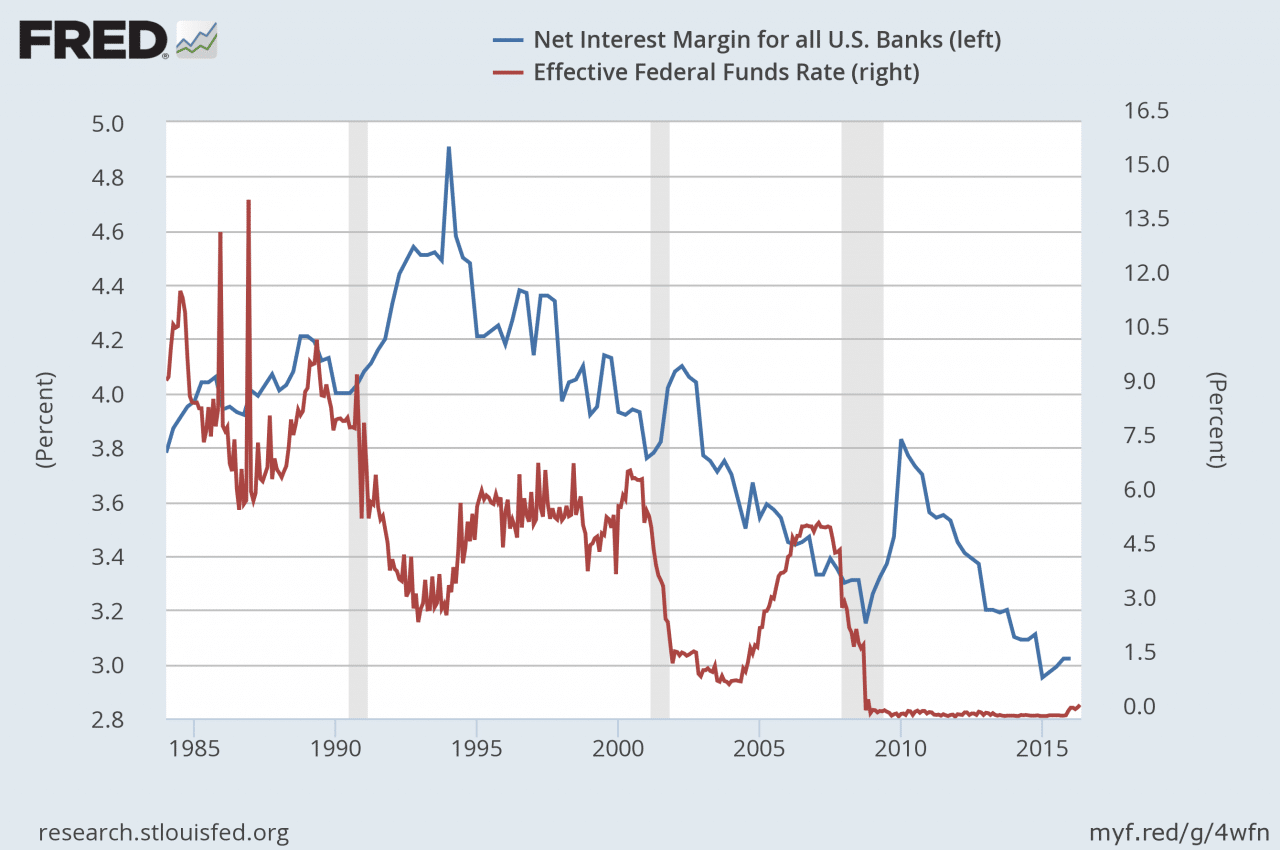 So given that an above-average number of banks have failed despite ZIRP, it’s difficult to argue that low-interest rates have kept unhealthy financial institutions alive.  However, I do think Scott is correct to assert that there were unhealthy financial institutions saved by the misguided federal government Troubled Asset Relief Plan, or “TARP.”  Institutions such as Bank of America (down ~60%) and Citigroup (down ~79%) are worth considerably less than they were before TARP was signed into law in October of 2008.  These banks were kept afloat by the capital injections from TARP, but they have failed to thrive.  In fact, they’ve been disasters for investors.  Just look at Citigroup; it received hundreds of billions in government guarantees, but even almost a decade later it remains a bottomless pit for investors.  It is usually foolish to argue counterfactuals, but I would have to agree with economist Israel Kirzner who said that “capital always ends up in the hands of those who will use it best.”  When that capital reallocation is stymied by government intervention, inefficiencies remain, and it’s likely that the economy is worse off in the long run.

Regarding energy, I think the argument is much the same.  Many have argued that ZIRP has led to a chase for yield, and this has led to a huge issuance of high yield debt in the energy sector as yield-hungry investors have forsaken prudence in the search for higher income streams.  While it is certainly likely that lenders were all too eager to give energy companies credit, I don’t think it was because of ZIRP.

For one, the B of A Merrill Lynch High Yield indicator reached its lowest point in 2007 even after successive Fed rate hikes: 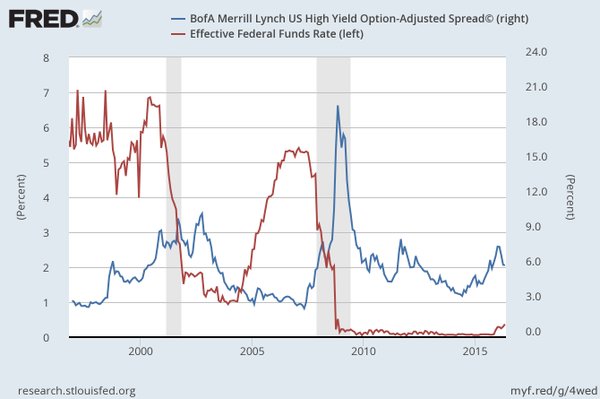 What was more likely, in my estimation, is that lenders got too caught up in the belief that oil prices would stay elevated forever, thinking that supplies were limited while demand, especially from growing economies such as China, would expand indefinitely.  They likely forgot, as my friend John Tamny pointed out years before the recent oil price collapse, that high oil prices are merely a function of a weak dollar.  When the dollar began to surge in 2014, the price of oil fell correspondingly, and only then did over-leveraged oil companies become vulnerable: 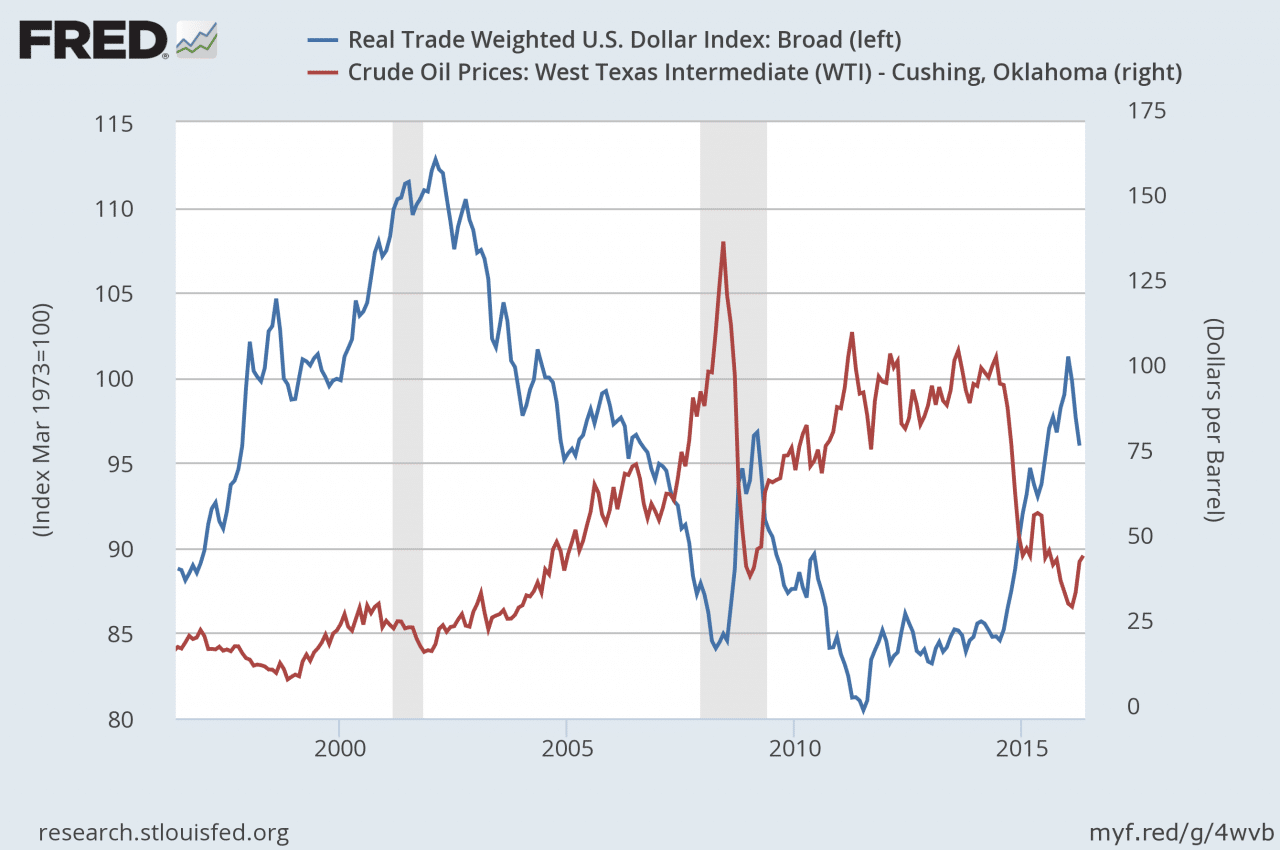 It is important to remember that investors have always been willing to give their precious capital to “can’t miss” propositions, valuations and fundamentals be damned.  For example, the late 1990s saw huge issuance of high yield debt by telecom industry, the industry that was the sure-fire ‘industry of the future.’  In any event, all of this issuance took place while the federal funds rate was was between four and six percent, which hardly qualifies as easy money policy

The point I’m trying to make is that low interest rates and credit do not amount to the same thing.  Historian Forrest McDonald, in his biography of Alexander Hamilton, gave my favorite definition of credit:  the willingness of another person to put his money in your hands.  Credit, in other words, has more to do with the lender’s confidence in your ability to pay him back than it does with the cost of money.  The Fed can lessen the cost of borrowing money, but it can’t create credit.  Again, John Tamny’s work is worth quoting here:

“Let’s face it, no amount of Fed interest-rate hiking could ever make credit expensive for Apple Inc…[and] no amount of Fed ease would make borrowing simple for Radio Shack.  Credit is not “money[;]” rather when we borrow we’re seeking access to real economic resources like computers, tractors, desks, buildings and labor.  In that sense credit is going to be cheap for businesses and individuals with great earnings or earnings potential, and very expensive for those without both.”

Simply put, the amount of money that flowed into energy projects not from a search for yield caused by ZIRP, but rather from investor belief in the promise of investment in higher oil prices.

Finally, regarding retail overcapacity, that has likely been the case for more than a decade.  In 2006 alone, many retailers closed locations because of unprofitable performance and increased competition from expansion from the likes of Wal-Mart, just as many apparel stores are now squarely in the crosshairs of Amazon.  And just like Radio Shack referenced above, most will go bankrupt or be forced to reorganize based on how investors and creditors view their prospects, not because the Fed hiked rates a few times.

So, to sum up, I think Scott is correct about too much overcapacity in certain industries, and too many large financial institutions left to linger years after the crisis.  However, where we might disagree is which of those policies are most responsible for the current malaise, and perhaps what exactly their impacts have been almost a decade since their implementation.

Now, to steal an idea from my friend, Ben Carlson, here are some other links I’ve found informative:

How To Stack The Odds In Your Favor – Irrelevant Investor

The disease of theory:  Crime & Punishment at 150 – New Criterion